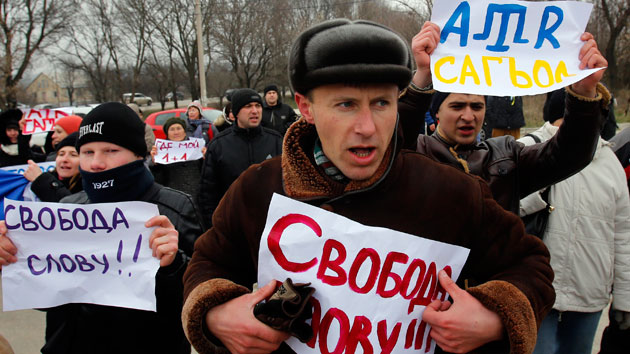 Crimean Tatars call for freedom of speech during a protest in Crimea in March. Darko Vojinovic/AP

Human rights violations, including killings, beatings, harassment of minorities, and abductions of journalists and activists, are escalating in Ukraine, according to a report released this weekend by the Office of the United Nations High Commissioner for Human Rights. The growing tension, the report says, is fueled primarily by the DIY armed groups and self defense units that have sprung up around the country.

The expansive report is based on information gathered by the UN’s Human Rights Monitoring Mission in Ukraine (HRMMU), and concludes that “the continuation of the rhetoric of hatred and propaganda fuels the escalation of the crisis in Ukraine, with a potential of spiraling out of control.” The Russian Foreign Ministry criticized the UN’s report for a “complete lack of objectivity, glaring disparities and double standards.”

We’ve gone through the full report and pulled out some of its noteworthy findings:

Discrimination against minority groups: The UN’s special rapporteur on minority issues visited Ukraine in April. On the issue of minority treatment, she warned that “in some localities the level of tension had reached dangerous levels.” Namely:

Detentions of journalists and activists

Freedom of the press is faltering: