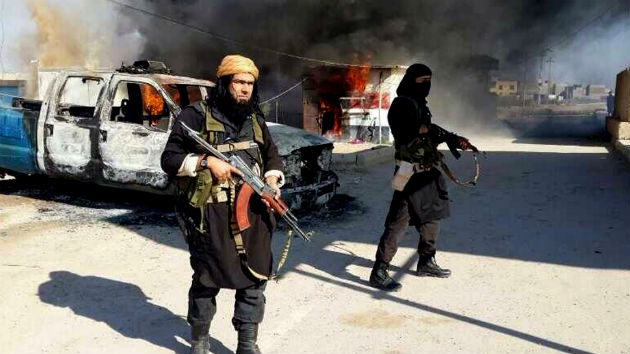 UPDATE, Monday, June 16, 6:56 p.m EDT: President Obama sent a letter to Congress late Monday informing the body that, under the War Powers Resolution, he would be sending up to 275 US troops to Iraq to protect the US embassy in Baghdad. In a statement to the press, the White House said that the Iraqi government had consented to the troop deployment. “This force is deploying for the purpose of protecting US citizens and property, if necessary, and is equipped for combat,” Obama’s letter says. “This force will remain in Iraq until the security situation becomes such that it is no longer needed.” Read Obama’s full letter to Congress here.

UPDATE, Monday, June 16, 12:09 p.m EDT: ISIS has captured several more small cities as the Iraqi government mobilizes thousands of untrained Shiite citizens to supplement the army, which has been sapped by desertions. Thousands of refugees have fled to the Syrian border. On Sunday, ISIS claimed it massacred 1,700 captured Shiite soldiers in Tikrit. News outlets couldn’t immediately verify that number. But ISIS posted grisly photos of its soldiers preparing to shoot prisoners, and the Associated Press reported Sunday that Iraq’s top military spokesman had confirmed the authenticity of the photos.

Secretary of State John Kerry said Monday that the US is open to working with Iran to stop ISIS. He said President Obama is weighing all available options, including drone strikes. (The administration has ruled out sending ground troops.) The US plans to evacuate some of the 5,500 employees at the US Embassy in Baghdad.

Iraq is rapidly slipping out of government control as an army of Al Qaeda-inspired militants storms toward Baghdad. Here’s what we know about who these fighters are and what drives them.

Read on for our explainer…

Who are these militants?

Some of the fighters are part of an Al Qaeda offshoot known as The Islamic State of Iraq and Syria (ISIS) or the Islamic State in Iraq and the Levant (ISIL). A Sunni militant group led by an Iraqi named Abu Bakr al-Baghdadi, ISIS grew out of Iraq’s Al Qaeda faction. US troops fought with ISIS and its predecessor until the day they withdrew from Iraq in December 2011.

In the last year, according to the Washington Post, the group became “far more lethal, effective, and powerful” as it focused on controlling parts of war-torn Syria. “ISIS lured into its ranks the bulk of the thousands of foreign volunteers, some from Europe and the United States, who have streamed into Syria to wage jihad, further bolstering its numbers.” ISIS already controls parts of northern Syria along the Euphrates River and much of the arid western region of Iraq, from the Syrian border to Fallujah. As a result of ISIS’s increasing dominance, a rift opened between Al Qaeda and ISIS earlier this year.

ISIS has combined forces with other militants, including local Sunni groups; militias led by members of the Baath party, which ruled the country under Saddam Hussein; and at least one of Hussein’s former top military commanders. It’s not necessarily an ad hoc allegiance: One military leader has said that the planning for this strike began two years ago.

The size of ISIS is unknown. According to the Guardian, the group commands roughly 10,000 men. They are well-trained: “They’re like ghosts,” said one Iraqi officer. “They appear, strike, and disappear in seconds.” Also, there’s this scary paragraph, via the Guardian (emphasis ours):

Iraqi officials told the Guardian that two divisions of Iraqi soldiers — roughly 30,000 men — simply turned and ran in the face of the assault by an insurgent force of just 800 fighters. Isis extremists roamed freely on Wednesday through the streets of Mosul, openly surprised at the ease with which they took Iraq’s second largest city after three days of sporadic fighting.

Why are they doing this?

ISIS is seeking to establish Sunni control over Iraq and the Levant region, which includes Jordan, Syria, Lebanon, and Palestine. In a video posted right after ISIS forces took Tikrit, the birthplace of Saddam Hussein, the group’s spokesman ordered ISIS forces to march on Baghdad, the seat of the country’s Shiite-led government. “We have a score to settle,” he says.

The militant groups assisting ISIS share the same goal, “which is getting rid of this sectarian government, ending this corrupt army and negotiating to form the Sunni Region,” a high-ranking Baathist leader told the New York Times.

Where is this all going down, exactly?

ISIS has seized northern Iraq at breakneck speed. Militia forces first clashed with Iraqi soldiers in Mosul, a city in northern Iraq and the country’s second-largest city, on June 7, and  controlled the city by June 10. By June 11, they had pushed south and taken Tikrit and Baiji, which supplies the cities of Kirkuk and Baghdad with electricity.

In Mosul, ISIS freed Al Qaeda fighters from prisons and Iraqi officers set fire to fuel and ammunition depots as they retreated. “Mosul now is like hell. It’s in flames and death is everywhere,” one refugee told Reuters.

The decisive battle will most likely take place in Baghdad. As ISIS converges on the city, hundreds of thousands of civilians are fleeing ahead of them.

In all, ISIS has some control or is fighting to take some two dozen large towns and cities across northern Iraq. Notable exceptions include Erbil and Kirkuk in the semiautonomous, oil-rich Kurdish region that borders Iran and Turkey. While reports indicate that Iraqi government troops have fled the area, Kurds say their pesh merga forces are in firm control of those key cities.

The New York Times has a useful map on where ISIS is gaining control in Iraq and Syria.

What is the Iraqi government doing about it?

The Iraqi army has skirmished with ISIS forces before, sometimes with the support of the country’s Shiite-aligned militia groups. But the Iraqi army has offered very little resistance to ISIS since this conflict kicked off last week. In Mosul, the site of the first major clash, many US-trained Iraqi soldiers abandoned their posts and stripped off their uniforms to blend in with fleeing mobs. An Iraqi military officer described witnessing a “a total collapse of the security forces” in Mosul.

Prime Minister Nouri al-Maliki has requested emergency powers in response to the threat. The Iraqi parliament delayed voting on a request, which reportedly entails the power to impose curfews and censor news media.

What is the US doing?

On Thursday, President Obama said that he and his national security team are weighing all options for helping the Iraqi government respond to ISIS advances. “I don’t rule out anything because we do have a stake in making sure that these jihadists are not getting a permanent foothold in either Iraq or Syria,” Obama said when asked whether he is considering drone strikes. (Maliki’s government reportedly wants the Obama administration to conduct targeted air strikes.) The president has the authority to intervene in Iraq without congressional approval because the original war authorization hasn’t expired. However, White House press secretary Jay Carney said that the administration is “not contemplating [sending] ground troops” to Iraq. The president is reportedly considering sending a small number of special forces to Iraq, according to US officials speaking to the AP.

Is anyone else doing anything?

The UK has ruled out military intervention, but may provide humanitarian aid. Iran, on the other hand, deployed Revolutionary Guard forces to help Iraqi troops, according to the Wall Street Journal.