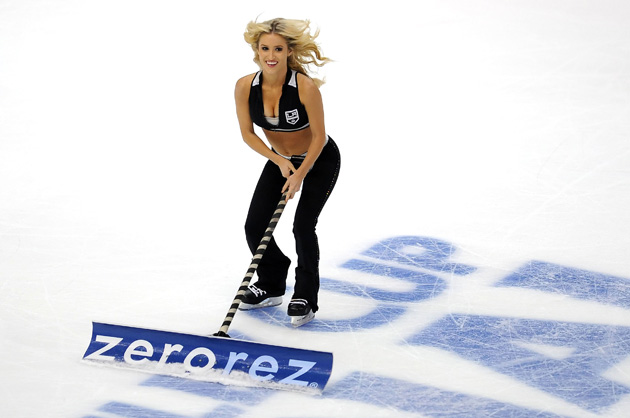 Update (10/1/14): After eliminating the team, the Flyers announced at a game last night that the ice girls are returning. Auditions will take place this weekend, and the ice team will appear at the October 9 game.

Update (9/23/14): The Flyers have eliminated their ice girls team, according to Deadspin. At the Flyers’ first preseason game yesterday, 12 men in orange jackets cleaned the ice—and were booed by the fans.

I co-wrote an article last month about the working conditions of NFL cheerleaders: Five cheer squads had recently sued their football teams alleging sub-minimum-wage pay and mandatory “jiggle tests,” among other indignities. Not long after the story ran, I received an email from a woman who had worked as one of the Philadelphia Flyers’ “ice girls.” “Speaking from personal experience,” she wrote, “ice girls are treated very similarly.”

With the Stanley Cup finals approaching—the Los Angeles Kings are now up 3-1 over the New York Rangers—I got to wondering how other NHL teams treat their ice girls, the scantily clad skaters who pump up the crowds and shovel the slush during breaks in the action. 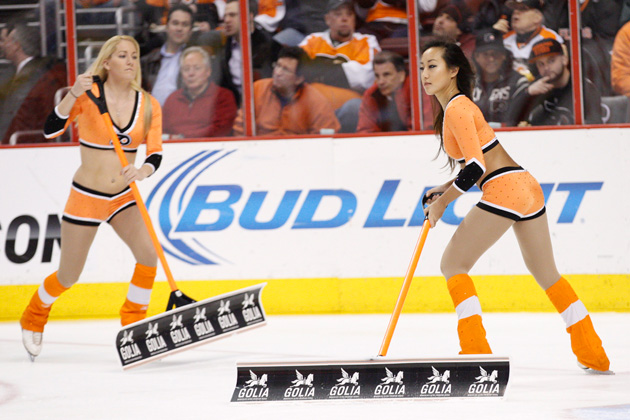 Members of the Flyers’ crew at a March 24 faceoff with the Kings. Chris Szagola/AP

It turns out that the Rangers dismantled their ice crew back in 2007, the same year they settled a lawsuit (pdf) by a former ice girl who had accused team officials of sexual harassment. The Kings still have their crew, though, and four women who were part of it between 2006 and 2012 agreed to talk to me about their experiences. I also caught up with three former Flyers women, who cheered for the Philly team between 2009 and the present. Their impressions varied: One woman called it “the best experience of my life” while more than one likened some aspects of it to “torture.” But their stories shared several common elements:

If a player walked into a restaurant where ice girls were eating, “we had to put it in a to-go container.”

When a player walks in, it’s time to go: Both the Kings and the Flyers, like a number of other NHL teams, have adopted policies that strongly discourage relationships between ice girls and hockey players: There was to be no fraternization of any kind, the women told me. To prevent rumors from starting, the ice girls were instructed to make sure they weren’t in the same place as the players outside of work. But the burden of responsibility was placed on the women: If a Kings ice girl was at a restaurant or bar and a player walked in, she was expected to get up and leave, even in the middle of a meal. The rule was unwritten but corroborated by all of the women with whom I spoke. “If we were out in public and there was a player there,” one Kings crew member explained delicately, “you want to remove yourself from that situation.” Another put it more bluntly: “We’re at the bottom of the totem pole.” 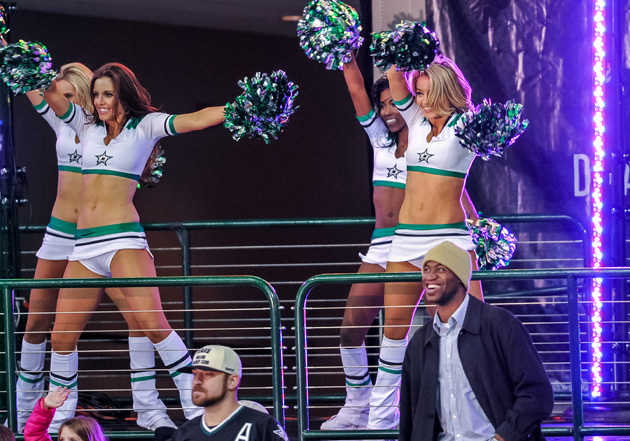 The policy interrupted meals on a regular basis. After games, the cheer team would often go to a restaurant across the street from a stadium. “There was always someone who was on alert, making sure the coast was clear,” recalled a former Kings ice girl. If a player walked into the restaurant, “we had to put it in a to-go container.” In a bar situation, she added, “We had to pay our tab and get the hell out of there.” The policy was especially inconvenient for women who lived in the same neighborhood as some of her team’s players. “Even if I wasn’t in uniform and I wasn’t clocked in,” another woman told me, “I’d still have to get out of that bar or restaurant or shopping center because I recognized a player across from me.”

“It was 20 degrees and we were in shorts, with two pairs of stockings” for more than eight hours.

Short shorts in frigid weather: Some teams, including the Flyers, have co-ed ice crews, but the men aren’t wearing booty-shorts and crop tops. And while most games are held indoors, teams and their cheer squads sometimes participate in outdoor games and events. In early 2012, the Flyers took part in a three-day outdoor festival and game called the Winter Classic. “It was 20 degrees and we were in shorts, with two pairs of stockings,” a former ice girl told me. Depending on the day, they spent six to nine hours outdoors: “It really felt like we were in some kind of torture camp.” Said another: “I’ve never been so cold in my life.”

The Flyers women agreed that they weren’t too cold out on the ice during regular games—they had to skate around for a few minutes in scant clothing, but they were full of adrenaline and could don a jacket when they left the ice. The bigger issue was “doing doors”—greeting fans as they entered the stadium. “When we’re standing at doors for an hour and it’s zero degrees and the doors keep opening,” said one woman, “that’s my biggest bone to pick.”

The Kings’ cheerleaders had balmier weather, but they described a similar, if unspoken, rule: If you’re on the ice or you’re performing or schmoozing in public, a former Kings’ crew member told me, “it was understood that you didn’t put your jacket on.” The rule applied regardless of weather conditions—including when the women stood outside the stadium to welcome fans. “One time, there were these dark black clouds,” one woman said, “and I asked to put a jacket on.” It was below 50 degrees out, but a more senior teammate insisted that it wasn’t cold, and told the women she couldn’t wear a jacket.

To eat at a charity event where food was served, “we’d have to go in a back corner where we couldn’t be seen.”

Scarfing food in the corner: During the Winter Classic, the Flyers ice team was not allowed to eat in public, despite the cold and the long hours. One squad member said she “had to sneak into a restaurant, get food, and hide in the back of somebody’s pickup truck” to eat it. Another ice girl befriended a woman who sold hot dogs and snuck her into the back room of her concession area so that she could eat.

The Kings women added that they were also prohibited from eating in uniform; the only place in the stadium they were allowed to eat was the locker room. If they were offered food at a corporate or charity event, “We’d have to go in a back corner,” one woman said, “where we couldn’t be seen.”

Meager wages and out-of-pocket expenses: There’s no arguing that professional cheerleaders are hired, in part, as eye candy for fans. Yet the Kings’ ice girls said they were expected not only to do their own hair and makeup, but to pay for their supplies. They were also instructed to consult their manager before cutting or dying their hair. And while other beauty standards weren’t explicit, the women knew they were expected to look good. One woman recalled her boss saying, “The Ducks girls [Anaheim’s hockey team] get weighed in, and you don’t, so you should feel lucky.” (A Ducks spokesman told me that the ice team does do fitness testing, but the women are not weighed in.)

“There should be an ice-girl union to fight for our rights.”

The Kings women I spoke with were paid about $15 per hour for corporate and charity appearances, and less for games—they worked between 10 and 30 hours per week. But some of them spent as much as $350 per month on makeup, including foundation (camera flash-ready, not loose powder), eyebrow waxing, teeth whitening, and hair supplies. The Flyers women had professional makeup people and hair stylists, but they made significantly less money—$50 for about seven hours of work on game day. A Kings representative declined to comment on the women’s claims, and the Flyers did not respond to detailed voice and email messages.

Despite their complaints, several women told me there were perks that in some cases brought them back year after year. “It was cool to be part of something that fun and that big,” said one former Kings squad member. “When you’re in that community, you’re sort of like a mini-celebrity. It’s your 15 minutes of fame.” A former Flyers veteran said she had generally enjoyed her experience, but added, “There should be an ice-girl union to fight for our rights. The girls have never fought for them before.”