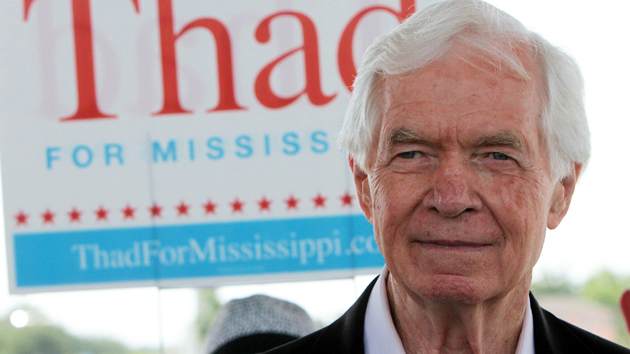 It’s RINO season in Mississippi, and whining time for the tea party. In a surprising finish to a bizarre Senate Republican primary contest in the Magnolia State, on Tuesday night Mississippi state Sen. Chris McDaniel, a tea party champion, defied the predictions of pundits and narrowly lost his bid to unseat longtime incumbent Sen. Thad Cochran. Though much of the instant analysis focused on Cochran’s savvy campaign strategy, Chris McDaniel’s defeat was also made possible by the extreme rhetoric of a right-wing talk-radio host named Chris McDaniel.

After winning a close primary last month but by not enough to prevent a runoff election, McDaniel fell short in the GOP rerun. Though this electoral season has seen too much focus on the simplistic is-the-tea-party-dead-or-alive narrative, McDaniel’s defeat is a blow to tea party hopes, and it will fuel the already intense intraparty feud. Before McDaniel made his oddly defiant nonconcession speech on Tuesday night—without mentioning Cochran and suggesting there was a way to contest the results—conservatives on Twitter were steaming mad at the GOP establishment that vanquished McDaniel in part because it persuaded African American voters to put their distaste for the GOP aside and vote for Cochran. Finally, a Republican candidate attracted black support—and the tea partiers were irate.

For the past year, the Cochran-McDaniel race often felt like a Coen brothers script. The contest managed to win the prize for most absurd Senate race in a cycle that featured an insurgent Republican in Kansas who posted X-rays of gunshot victims on his Facebook page and a tea partier in Kentucky who was caught attending a cockfight (and who denied he was there for the cockfighting). In June, a McDaniel supporter and two McDaniel campaign volunteers were arrested in connection with a break-in into the nursing home where Cochran’s wife lives. This dirty trick seemed to be part of an elaborate plot to reveal that the senator was having an affair with an aide. And a Cochran campaign staffer was fired after defacing McDaniel campaign signs. With the race seemingly locked up for McDaniel prior to the runoff (if you believed the polling), the tea party favorite—who campaigned with a kooky anti-Obama conspiracy theorist—took to Facebook to taunt his opponent’s daughter. Maybe that wasn’t the best move.

McDaniel entered the race against Cochran last fall with the support of the big-money tea party outfits, such as the Club for Growth and the Senate Conservatives Fund. He tapped into right-wing dissatisfaction with Cochran, who had brought billions of dollars in funding to the state since winning the seat in 1978. After the first primary, Cochran sought to counter the tea party assault by encouraging black voters to support him in the runoff. That move—soliciting crucial support from a Democratic voting bloc—further irked conservatives. Mississippi law prohibits voters from participating in a primary unless they plan to support the nominee—an unenforceable provision in a nation of secret balloting. McDaniel allies talked about sending in poll watchers, only, they said, to determine nothing fishy was going on. And on the 50th anniversary of Freedom Summer, Mississippi was once again embroiled in a controversy over black voting.

Team McDaniel’s tactics seemed to bolster Cochran’s outreach strategy. “The tea party intends to prevent blacks from voting on Tuesday,” read one mailer distributed in black neighborhoods. It noted that McDaniel had once hosted a controversial radio show and had voted against a civil rights museum. “Mississippians cannot and will not be intimidated to the bygone era of intimidating black Mississippians from voting,” this campaign flyer declared.

The mailer asserted that McDaniel “made racist comments on his radio show.” It was a point Cochran’s campaign had been hammering for months, seemingly without affecting a sufficient number of white Republican primary voters. As a right-wing radio host in the 2000s, McDaniel had blamed hip-hop for gun violence. He had mocked poor blacks for craving “big screen plasma TV’s, Randy Moss jerseys, Air Jordan sneakers, or any type of ‘bling-bling.'” He had decried discussion of reparations for slavery—pledging to move to Mexico, if such a law were ever passed. He also had spoken at events held by a neo-Confederate group that bashed Abraham Lincoln and celebrated secession. His incendiary comments, some of which were first reported by Mother Jones, gave Cochran a bona fide reason to ask African American voters, who comprise 36 percent of the state’s electorate, to keep McDaniel far from Washington’s halls of power.

After the votes were counted on election night—and McDaniel had lost by 1.6 points—the tea party insurgent showed no signs of surrendering. “We have to be absolutely certain that Republican primary was won by Republican voters,” he told his supporters. “There is something a bit unusual about a Republican primary decided by liberal Democrats.” Guess which voters he was referring to. His race may be done, but the fight is not over.