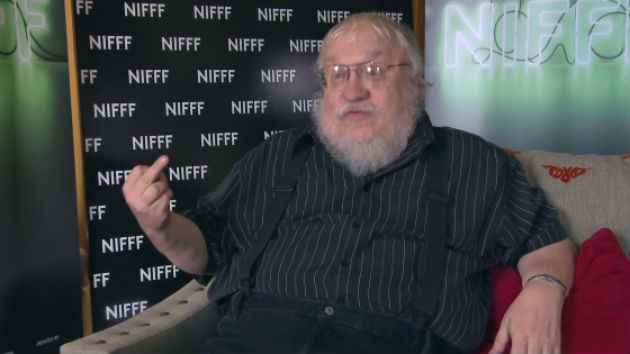 Game of Thrones author George R.R. Martin is 65 years old. Because of this, some of his fans are deeply worried that he won’t finish writing his A Song of Ice And Fire fantasy book series (which began in 1996, and is the basis for the hit HBO show) before he dies. (See: the case of fellow fantasy author Robert Jordan.)

Well, he was asked about this during a recent interview with Swiss newspaper Tages-Anzeiger. Here’s his response:

Well, I find that question, you know, pretty offensive, frankly, when people start speculating about my death and my health. So, ‘fuck you’ to those people. [Laughs.]

This isn’t the first time Martin has addressed this concern among his readers. In 2012, he wrote a blog post trolling his fans who are so obsessed with the series that they routinely berate him for working on other projects. It reads:

Reading. I just finished THE KING’S BLOOD, the second volume of Daniel Abraham’s “Dagger and Coin” series. Books like this remind me why I love epic fantasy. Yes, I’m prejudiced, Daniel is a friend and sometime collaborator… but damn, that was a good book. Great world, great characters, thoroughly engrossing story. The only problem was, it ended too soon. I want more. I want to know what happens to Cithrin, and Marcus, and Geder, and Clara. And I want to know NOW. God damn you, Daniel Abraham. I know for a fact that you are writing more Expanse books with Ty, and more urban fantasies as M.L.N. Hanover, and doing short stories for some hack anthologist, and scripting some goddamn COMIC BOOK, and even sleeping with your wife and playing with your daughter. STOP ALL THAT AT ONCE, and get to writing on the next Dagger and Coin. I refuse to wait.

“Fuck you” is more succinct.