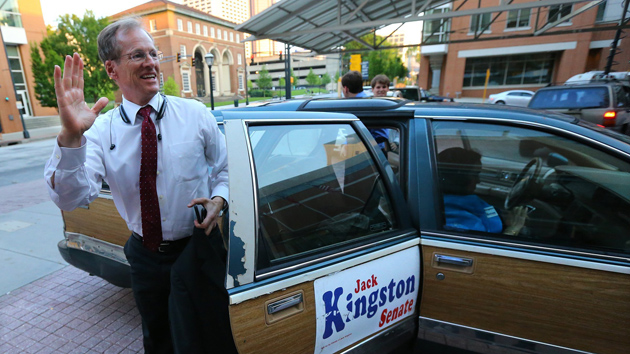 In the run-up to last May’s primary to replace retiring Sen. Saxby Chambliss, Georgia Republicans flirted with a large field of candidates that included Reps. Paul Broun (who once called evolution a lie “from the pit of hell”) and Phil Gingrey (who once defended Todd Akin). But when the dust settled, it was former Dollar General CEO David Perdue and 11-term congressman Jack Kingston who went on to a top-two runoff—a decision framed at the time as a victory for the Chamber of Commerce Republican establishment over the tea party fringe. On Tuesday, after trailing in every poll, Perdue won a narrow victory to claim the GOP nomination. He will take on Democrat Michelle Nunn (the daughter of former Sen. Sam Nunn) in November.

But the real story may be the lack of influence wielded by Kingston’s biggest supporter, the US Chamber of Commerce. The Chamber backed Kingston to the tune of $2.3 million in TV ads during the primary, only to see him use its most precious issues as mallets with which to bludgeon Perdue. Take the Common Core State Standards, a set of national math and language-arts benchmarks for public schools that have become a bogeyman for conservatives. The Chamber supports Common Core and recently poured $1.38 million into a PR campaign to promote it. But that didn’t stop Kingston from characterizing Common Core as an abomination and attacking Perdue—who himself has been highly critical of the standards—for supporting “the Obamacare of education.” In the final days of the race, Perdue fought back, running ads depicting Kingston as soft on immigration because of his support from the Chamber, which backs comprehensive immigration reform with a path to citizenship. “Kingston’s pro-amnesty vote is bought and paid for,” one ad warned. Kingston, in turn, had falsely accused Perdue of supporting amnesty during the runoff.

Kingston will likely land on his feet—11-term congressmen beloved by the Chamber of Commerce tend to do pretty well in Washington!—but his days in Congress are now numbered. At least we’ll always have this video of him explaining why evolution is a myth—because Jack Kingston is not descended from an ape.