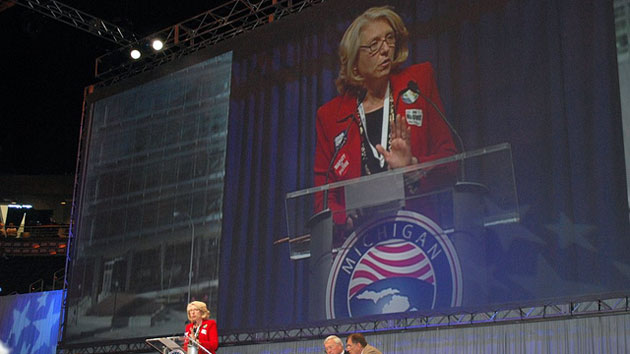 Terri Lynn Land speaks at the Michigan Republican convention in 2010.<a href="https://www.flickr.com/photos/billrice/4937783028">Bill Rice</a>/Flickr

Terri Lynn Land, the Republican candidate for US Senate in Michigan, has given nearly $3 million to her own campaign. That’s perfectly legal—candidates can give as much as they want to their campaigns.

Here’s the trouble: On the financial disclosure forms she filed last year and this May with the Federal Election Commission, Land reported she has assets of only about $1.5 million. So how could she give herself twice as much?

Don’t fear, Land fans; her staff has an explanation. The other money was in a joint checking account she has with her husband Dan Hibma, a millionaire real estate developer. On Friday, the Land campaign told the Detroit Free Press (which broke this story) that in 2013 she “inadvertently” omitted the account from her disclosure form and in 2014 she “inadvertently” listed the account as solely owned by Hibma. In other words, Land claims she forgot about an account she had with an enormous amount of money in it—even as she was using that money to fund her campaign.

The Land campaign has not said how much money is in that joint checking account. “A candidate suddenly coming into possession of several million dollars raises questions,” Paul Ryan, a campaign finance expert at the Campaign Legal Center (no, not that Paul Ryan), told the Free Press.

As Michigan’s secretary of state from 2003 until 2011, Land was responsible for enforcing the state’s campaign finance laws.