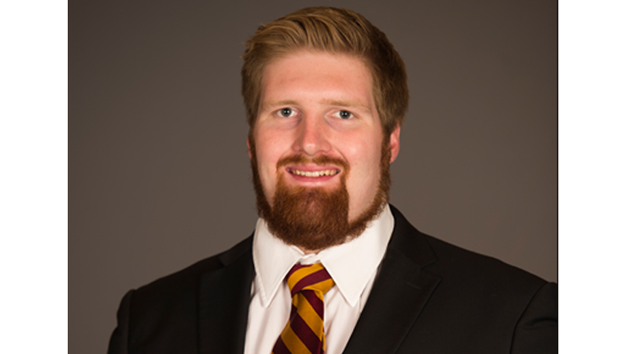 Although his conversation with Compete—a Tempe-based LGBT sports magazine—marks the first time Sarafin has told his story to the media, he said he came out to his teammates last spring. “It was really personal to me,” he said, “and it benefited by peace of mind greatly.”

Sarafin, who is a fifth-year senior earning a master’s degree in biomedical engineering, has not played in a game in his four years as a Sun Devil. With his announcement, he follows in the steps of current St. Louis Rams linebacker Michael Sam, who came out to the media after completing his college football career at the University of Missouri, and the University of Massachusetts’ Derrick Gordon, who became the first openly gay men’s college basketball player just months ago. Sam tweeted his support shortly after the news broke:

Congratulations Chip Sarafin for having the courage to be yourself. Wishing you and your teammates much success this season. #courage2014

Arizona State football coach Todd Graham had this to say about Sarafin in a statement Wednesday:

We are a brotherhood that is not defined by cultural and personal differences, but rather an individual’s commitment to the Sun Devil Way. Chip is a fifth-year senior and a Scholar Baller, a graduate and a master’s student. His commitment to service is unmatched and it is clear he is on his way to leading a successful life after his playing career, a goal that I have for every student-athlete. Diversity and acceptance are two of the pillars of our program, and he has full support from his teammates and the coaching staff.

Sarafin, who plans to become a neurologist, is currently helping develop a lightweight, sturdy carbon-fiber football helmet. He does outreach with younger athletes, educating them on the dangers of playing through concussions. He says he strives to be the type of person who “gives back to everyone and loves his family.”