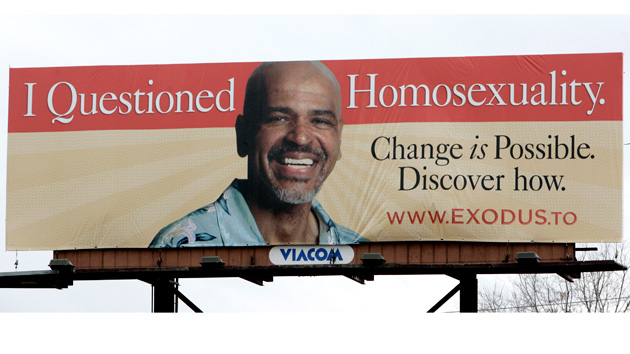 An Exodus International billboard, before that ex-gay group shut down last summer.James A. Finley/AP

As the “ex-gay therapy” movement suffers major legal and legislative blows, one of its leading proponents has undergone a major rebranding effort.

On Wednesday, in a bizarre, décolletage-heavy, news-style video, the National Association for Research & Therapy of Homosexuality (NARTH)—the professional organization for conversion therapists—reestablished itself as the Alliance for Therapeutic Choice and Scientific Integrity (ATCSI). In what it calls a “major expansion of our mission,” ATCSI claims it will continue “preserving the right of individuals to obtain the services of a therapist who honors their values, advocating for integrity and objectivity in social science research, and ensuring that competent licensed, professional assistance is available for persons who experience unwanted homosexual (same-sex) attractions.”

NARTH’s makeover, along with a similar rebranding effort by Parents and Friends of Ex-Gays (PFOX), comes in response to growing national opposition to conversion therapy. ATCSI’s new website says the group has become “increasingly involved in legal and professional efforts to defend the rights of clients to pursue change-oriented psychological care as well as the rights of licensed mental health professionals.”

Jews Offering New Alternatives for Healing (JONAH), another ex-gay therapy organization run by former NARTH Board Member (and convicted fraudster) Arthur Abba Goldberg, is currently being sued for a different kind of fraud—accepting money but failing to deliver on the conversion promised.

NARTH once encouraged clients to increase their manliness by drinking Gatorade and calling their friends “dude.”

Meanwhile, California and New Jersey‘s bans on ex-gay therapy for minors have held up in court. Michigan may be next to pass a similar bill. Many conversion therapy groups have shut down in recent years, including Love in Action, Evergreen International, Love Won Out, and Exodus International; The latter’s president issued an apologetic open letter to the LGBT community last summer. In July, nine remorseful former leaders in the ex-gay therapy movement penned a joint letter condemning ex-gay therapy as an “ineffective and harmful” practice that “reinforces internalized homophobia, anxiety, guilt, and depression.”

Despite this growing tide of opposition, ex-gay therapy is not a thing of the past. Proposed youth bans similar to California’s and New Jersey’s have failed to pass in Virginia, Illinois, Maryland, Minnesota, New York, Washington, Ohio, Florida, Wisconsin, Hawaii and Rhode Island. The Republican Party of Texas even endorses the practice in its draft 2014 platform.

TWO’s press release also points out some of NARTH’s stranger recommendations: The group has encouraged clients to increase their manliness by drinking Gatorade and calling their friends “dude.”