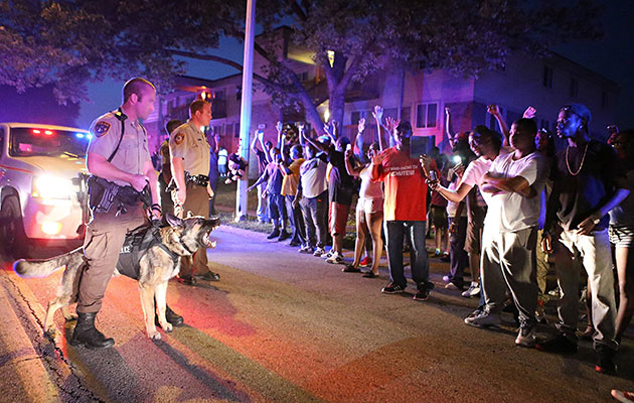 As darkness fell on Canfield Drive on August 9, a makeshift memorial sprang up in the middle of the street where Michael Brown’s body had been sprawled in plain view for more than four hours. Flowers and candles were scattered over the bloodstains on the pavement. Someone had affixed a stuffed animal to a streetlight pole a few yards away. Neighborhood residents and others were gathering, many of them upset and angry.

Soon, police vehicles reappeared, including from the St. Louis County Police Department, which had taken control of the investigation. Several officers emerged with dogs. What happened next, according to several sources, was emblematic of what has inflamed the city of Ferguson, Missouri, ever since the unarmed 18-year-old was gunned down: An officer on the street let the dog he was controlling urinate on the memorial site.

The incident was related to me separately by three state and local officials who worked with the community in the immediate aftermath of the shooting. One confirmed that he interviewed an eyewitness, a young woman, and pressed her on what exactly she saw. “She said that the officer just let the dog pee on it,” that official told me. “She was very distraught about it.” The identity of the officer who handled the dog and the agency he was with remain unclear.

Candles and flowers marking the spot where Brown died were soon run over by police vehicles.

The day brought other indignities for Brown’s family, and the community. Missouri state Rep. Sharon Pace, whose district includes the neighborhood where the shooting occurred, told me she went to the scene that afternoon to comfort the parents, who were blocked by police from approaching their son’s body. Pace purchased some tea lights for the family, and around 7 p.m. she joined Brown’s mother, Lesley McSpadden, and others as they placed the candles and sprinkled flowers on the ground where Brown had died. “They spelled out his initials with rose petals over the bloodstains,” Pace recalled.

By then, police had prohibited all vehicles from entering Canfield Drive except for their own. Soon the candles and flowers had been smashed, after police drove over them.

“That made people in the crowd mad,” Pace said, “and it made me mad.” Some residents began walking in front of police vehicles at the end of the block to prevent them from driving in. 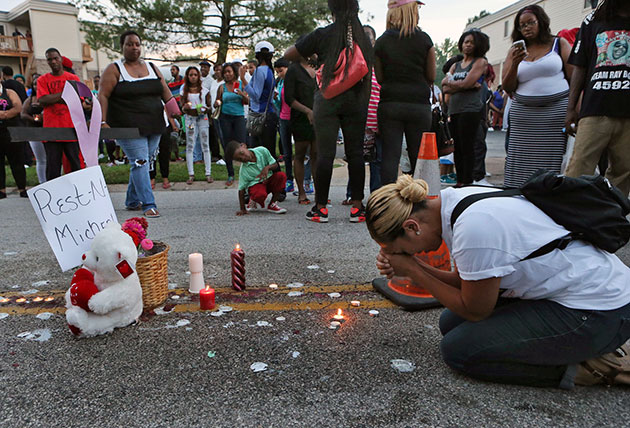 A woman prays at the site on Sunday, August 10, where Michael Brown was killed the previous afternoon. J.B. Forbes/St. Louis Post-Dispatch/AP

A spokesperson for the St. Louis County Police told me that the department was unaware of these incidents; he added that complaints should be submitted to the department’s Bureau of Professional Standards.

St. Louis alderman Antonio French, who was on the scene that night, tweeted videos and photos including one of the mangled memorial:

They’ve brought the dogs out in #Ferguson https://t.co/gXQeLtaXjt

Police cars trampled the rose petals and candles at the memorial for #MikeBrown. pic.twitter.com/nb2fQSrkMX

(Also see our visual timeline of the shooting and its aftermath.)

Several sources in Missouri government and law enforcement insisted to me that some criticism of the police response to the unrest has been overblown. Multiple agencies quickly responded to the chaos: “We’d never had such a blatant incident like this,” one person told me. “It just went over the top.”

But others, including Rep. Pace, said the problems ran so deep that they continued even after Gov. Jay Nixon stepped in and put the Missouri Highway Patrol in charge. On the afternoon of August 19, Pace and her colleague Rep. Tommie Pierson, whose district abuts hers, were standing near the McDonald’s on West Florissant Avenue, observing a group of about 100 protesters marching down the street. There was a strong police presence but the atmosphere remained peaceful, Pace told me, and their goal was to mediate between their constituents and law enforcement. Police officers approached and ordered the crowd to keep moving. A female Missouri Highway Patrol officer confronted Pierson, reaching for her mace.

“Are you getting ready to mace me?” Pierson asked in disbelief. The officer backed off after Pace explained to another cop who they were.

“It’s bad when you don’t have any respect for anybody,” Pierson told me last week. “Even now that’s still going on: ‘You do what I tell you, or I’ll mace you, I’ll shoot you, no questions asked.'” (The Missouri Highway Patrol did not respond to a request for comment. Later that night a police officer from another agency was recorded pointing a semi-automatic rifle at nonviolent protesters and threatening, “I will fucking kill you, get back.“)

Brown’s killing and the heavy-handed response to the protests were seen by many in the community as “a declaration of war.”

Throughout the conflict in Ferguson, certain police tactics clearly helped escalate the long-simmering tensions in a city with a majority black population and mostly white power structure. One state official told me that people in the community saw the way Brown’s body was handled as a deliberate act of intimidation, echoing the slavery era, “when somebody was beaten or lynched and they made everybody come out and watch.” With regard to the Ferguson police force, this official added: “They have an ‘us against them’ attitude, and they care nothing at all about the people who pay their salaries and that they have sworn to serve and protect.”

Darren Wilson, the officer who killed Brown, made his home in Crestwood, a suburb about 17 miles from Ferguson whose population is 94 percent white. The Washington Post reported that prior to serving on the Ferguson police force, Wilson served in the neighboring municipality of Jennings, whose police department was so plagued by racial tension and excessive use of force that the city council disbanded it in 2011. It should come as little surprise, one Ferguson community leader told me, that Brown’s killing and the heavy-handed response to the protests were seen by many as “a declaration of war.”

The thinking behind that response—among Ferguson police as well as the other agencies called in for assistance—has largely remained obscure to the public. One Missouri official with ties to Ferguson told me that fears about widespread looting appeared to play a role. Though it drew little notice beyond St. Louis media, in the first couple of nights after Brown’s death sporadic looting and violence occurred well beyond Ferguson, in south St. Louis and in a shopping mall in Richmond Heights.

Looting elsewhere in St. Louis and a jump in gun sales put police on edge.

“I think that gave an impression that it was going to happen everywhere and the police need to react accordingly,” the official said. Gun sales in St. Louis also jumped. But a crucial factor in the police response, in his view, was that “a lot of them are not adequately trained. They’ve got an extraordinary situation that they’re put into, and what do they know? They know force.” Then add in the military gear that police departments have received since 9/11—”stuff that was produced for Iraq or Afghanistan.” (A person involved with the special operations division of the St. Louis County Police Department gave me a more positive assessment, noting that despite several nights of violence, nobody was seriously hurt or killed in the police response.)

Charles Henson, a former member of the Ferguson-Florissant school board, suggests that while police made mistakes, some unfair criticisms have been piled on. “A lot of people got very angry about the officer being put on paid leave while the shooting is investigated, but I think that is just following protocol,” he told me.

“The real hope now is that a light has been shined,” Henson added. “There is a lot of work to be done in this community, and if folks in the city government feel that there’s not an issue with regard to bias and race, then we’ve got a problem. Because that’s fuel for another situation like this to happen again, and we can’t take another one of these.”