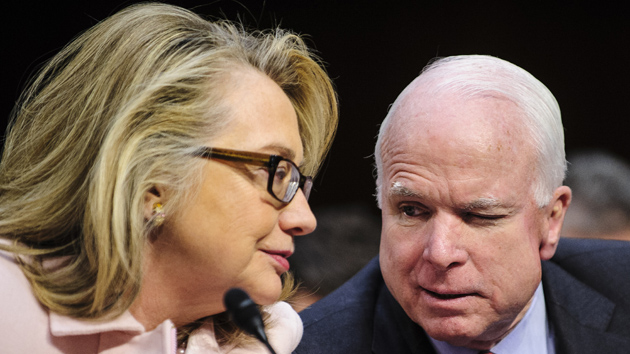 In a recent interview with the Atlantic, Hillary Clinton went to great lengths to separate herself from her former boss, President Obama, in the realm of foreign policy. She unabashedly defended Israel’s actions in the ongoing war in Gaza, chalked up civilian casualties in that conflict to “the fog of war,” drew a hard line on Iran, and argued that the “failure” of the Obama administration to arm Syrian rebel forces led to the rise of the Islamic State. Asked about the president’s unofficial motto for foreign interventions—“Don’t do stupid stuff”—Clinton did not mince words: “Great nations need organizing principles, and ‘Don’t do stupid stuff’ is not an organizing principle.”

Hillary’s talking like a hawk again. Critics on the left and right have said she sounds more like Sen. John McCain (R-Ariz.), the grand old hawk of the GOP. How right they are. Can you guess who gave the following quotes—Clinton or McCain?