There’s a lot of evidence that record-high income inequality has gutted the United States’ post-recession recovery. But on Tuesday, the argument was made by an unexpected source: Standard & Poor’s (S&P), a Wall Street firm providing ratings and analysis on stocks and bonds, issued a report pointing out economic disparity’s role in “dampening US economic growth.”

Over the next decade, S&P forecasts that the economy will expand at just a 2.5 percent annual rate, a downgrade from the 2.8 percent growth it predicted just five years ago. One explanation: “At extreme levels, income inequality can harm sustained economic growth over long periods. The US is approaching that threshold.” 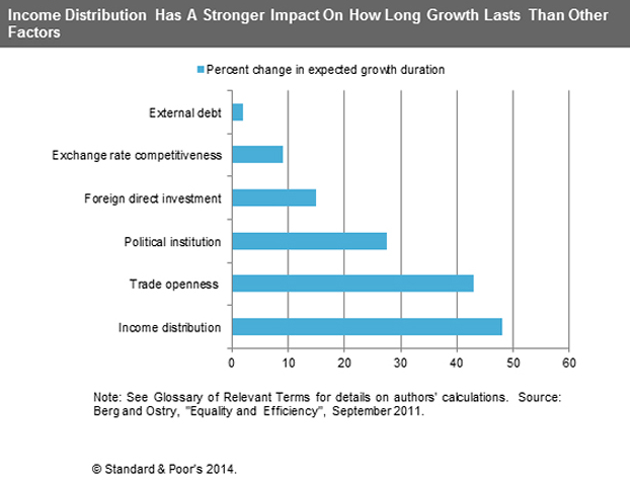 The gap between the richest and poorest Americans has been skyrocketing for decades, with no end in sight. How exactly does this widening wealth gap affect the economy? “Higher levels of income inequality increase political pressures, discouraging trade, investment, and hiring,” the report explains. It leads extremely wealthy households to save more and consume less, while lower-income households must borrow to sustain consumption. “When these imbalances can no longer be sustained, we see a boom/bust cycle such as the one that culminated in the Great Recession.”

S&P warns against drastic changes to the tax code, arguing that “heavy taxation solely to equalize wages may reduce incentives to work or hire more workers…Policymakers should take care, however, to avoid policies and practices that are either too heavy handed or foster an unchecked widening of the wealth gap. Extreme approaches on either side would stunt GDP growth.”

Instead, S&P suggests focusing on education to increase national productivity. According to the report, one additional year of education in the American workforce could increase GDP by $525 billion—about a 2.4 percent boost—over the next five years.

As S&P ominously concludes the report, “A lifeboat carrying a few, surrounded by many treading water, risks capsizing.”