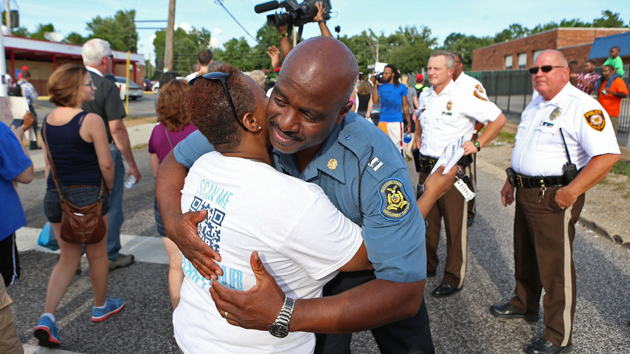 After four nights of heavy-handed police response, a missing-in-action governor and the general appearance of a war zone, things were much calmer in Ferguson, MO, Thursday night. Missouri Highway Patrol Capt. Ronald Johnson was put in charge, and he pledged to strike a more respectful tone with protesters. It showed in the images that poured out of the small town north of St. Louis and other rallies around the country, many using the #NMOS14 hash tag to honor victims of police brutality.

Tranquility amidst all the noise in #Ferguson pic.twitter.com/kh75uJwdjq

A strange calm descends on Ferguson. My report from the ground for @newsweek http://t.co/aPTolvK6in pic.twitter.com/vlRyCt6UZN

This is probably the greatest thing I’ve seen so far #NMOS14 pic.twitter.com/GBLaGMe4p5

How Missouri Highway Patrol Captain Ron Johnson is spending his time in Ferguson. If you want peace STAND for peace pic.twitter.com/mrAqMg7PEJ

Death of Michael Brown, many others, hangs over Oakland vigil: http://t.co/6TvQTk24dr pic.twitter.com/HfdhLOhyfC

About 100 protestors are standing in silence at the #Ferguson vigil in downtown Seattle. #NMOS14 pic.twitter.com/C71rEjfdwX