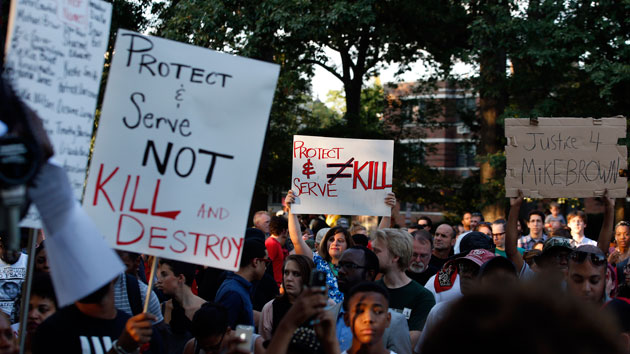 An August 14th rally at Meridian Hill Park to protest the fatal shooting by police of Michael Brown in Ferguson, Missouri.Alex Brandon/AP Photo

At least four black men were killed by police in the past month, via chokehold, tasing, and shootings, after being confronted for reasons ranging from selling untaxed cigarettes to picking up a BB gun off a shelf in Wal-Mart.

In at least two of these cases—Dante Parker and Eric Garner—the victims allegedly resisted arrest. Some political leaders, witnesses at the scene, and Internet commenters have placed blame on the victims for this reason, saying their refusal to go quietly with the cops is what ended their lives.

“For FUCKS SAKE stop struggling and resisting like this and deal with it at the precinct!! Resisting arrest, even if the police have the wrong guy, is a TERRIBLE idea!! God why don’t people get this?” writes one commenter at Gawker. At a press conference on gun control in Harlem yesterday, New York City Mayor Bill De Blasio said that “once an officer has decided that arrest is necessary, every New Yorker should agree to do what they need to do as a citizen and respect the police officer and follow their guidance. And then there is a thorough due-process system thereafter.”

And how about in the tasing death of Dante Parker? A San Bernadino county newspaper employee and married father of five with no criminal record, Parker was out riding his bike for exercise on Tuesday when he was approached by sheriff’s deputies as a robbery suspect. A witness relayed what he saw:

So why would someone like Dante Parker or Eric Garner resist arrest? Here are six good reasons:

Asking why a black man with even the slightest bit of awareness of these facts wouldn’t fully cooperate with the cops is a bit like asking why William Wallace didn’t simply extend a warm welcome to the invading English forces. Here’s a better question: What are law enforcement agencies doing to heal their relationships with the black communities they’re supposed to protect and serve?