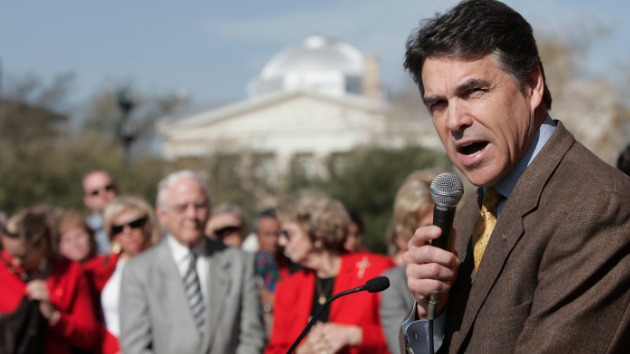 Rick Perry speaks to a group of anti-abortion-rights activists in 2009.Harry Cabluck/AP

Denying Texas women access to abortion is proving to be pricey. Texas has paid Vincent Rue, a Florida marriage therapist best known for his discredited theories about how abortion causes mental illness, more than $42,000 in less than six months to aid its legal defense of a new law that would close all but a handful of the state’s abortion clinics.

The controversial legislation, which was the target of state Sen. Wendy Davis’s 11-hour filibuster, places strict new regulations on abortion clinics with the aim of shutting them down. Its most onerous provision—which the Center for Reproductive Rights, a legal advocacy group, is challenging in court—gives abortion clinics until September 1 to meet the standards of ambulatory surgical centers. A typical abortion does not require the features of an ambulatory surgical center, such as general anesthesia. Only six Texas clinics currently qualify as ambulatory surgical centers. The state’s other 15 clinics would need upgrades to operating rooms and construction to widen hallways in order to meet the standard—a costly prospect that will ultimately force these clinics to close.

Judges in other states have thrown out less draconian laws. So to defend its abortion restrictions, Texas brought in Rue, who helped draft, edit, and find citations for the reports its experts witnesses submit to the court. But Rue, who holds a doctorate in family relations from the University of North Carolina School of Home Economics, is an odd choice for the job—”a long-discredited quack,” in the view of one state representative from Wisconsin, where Rue performed similar defense work. Although Rue testified about the harms of abortion in two landmark abortion cases in the early 1990s, the judges in those cases dismissed his testimony as personally biased and lacking expertise. Rue has pushed the medical mainstream to recognize “post-abortive syndrome”—a mental illness that supposedly results from abortion—only to have organizations such as the National Center for Health Statistics pan his research. In 1981, he claimed in a report to the US Senate that “abortion re-escalates the battle between the sexes” and “abortion increases bitterness toward men.”

This hasn’t stopped Rue from getting regular work as an expert on abortion, although he no longer testifies in court. In the past two years, Republican administrations in four states—Alabama, North Dakota, Texas, and Wisconsin—have paid or promised to pay Rue $192,205.50 in exchange for help defending anti-abortion laws.

Abortion rights advocates bank on Rue’s involvement in these cases to undermine the states’ arguments. Last week, an Alabama judge who heard a challenge to one of the state’s recent anti-abortion laws discounted the testimony of one of Rue’s go-to experts; during cross-examination, the judge had been disturbed to learn about Rue’s heavy influence on the expert’s testimony. Lawyers for Planned Parenthood highlighted Rue’s past in their ongoing challenge to a Wisconsin law requiring admitting privileges for abortion providers. And in Texas, according to accounts of the trial from the Houston Chronicle and Austin Chronicle, attorneys for the Center for Reproductive Rights made Rue’s connection to the defense a key point in cross-examination of state witnesses last week.

Lee Yeakel, the federal judge who’s handling the Texas case, allowed emails into evidence purporting to show how Rue influenced Kitz. “Tried to use as much of your material as I could, but time ran out,” Kitz wrote to Rue in one email. In another email, Kitz referred to the document Rue was editing in quotations—”my” report. Kitz also pushed back against Rue for adding citations to her draft of sources she hadn’t read. On Thursday, Kitz testified that the ideas in her report were her own.

The state also called Peter Uhlenberg, a sociologist at the University of North Carolina-Chapel Hill, to testify that obtaining hospital admitting privileges was not as difficult as abortion providers made it out to be. Emails produced by the prosecution show that Rue gave Uhlenberg sources, “ideas,” and “fact changes,” according to the Austin Chronicle. “I need your critical suggestions,” Uhlenberg wrote to Rue in one message. Uhlenberg testified that he did not seek input from Rue.

Another witness for the state was James C. Anderson, a Virginia emergency room doctor and the chair of Virginia Physicians for Life. Rue has tapped Anderson as an expert witness in Alabama, Alaska, North Dakota, and Wisconsin. These states have paid Anderson more than $110,000.

Anderson testified that Rue had provided sources for his testimony and “wordsmithing.” Anderson made a similar admission to an Alabama court in May, in the course of defending a law that would have closed three of state’s five clinics. In that case, Rue’s involvement may have caused the judge in that case to discredit Anderson’s testimony. When Anderson admitted that he wasn’t aware two courts had tossed Rue’s testimony, and the judge grew incredulous. “You say you don’t know his employment or any organizations that he belongs to,” the judge said to Anderson. “Why do you trust him?” Last week, in his opinion striking down the anti-abortion law, the judge said he had ignored Anderson’s testimony “due to concerns about his judgment or honesty.”

Anderson, Kitz, and Rue did not reply to calls and emails seeking comment. Uhlenberg declined to comment until the end of the trial.

Rue’s work with several states is ongoing. In the nine weeks since Mother Jones first reported on Rue’s involvement with these lawsuits, Alabama, Texas, and Wisconsin have paid him an additional $25,417.50. North Dakota may soon offer another opportunity for a paycheck: The state has appealed a decision striking down a six-week abortion ban, which Rue helped defend, and the Legislature has provided the attorney general with $400,000 to fight for the law. A spokeswoman for North Dakota Attorney General Wayne Stenehjem wouldn’t say whether he would hire Rue to work on the appeal.