Update (10/14/2014): This afternoon, the Supreme Court blocked a ruling from the US Court of Appeals for the Fifth Circuit that had shuttered most of Texas’ abortion clinics. Thirteen clinics in the state will be able to reopen tomorrow, according to the New York Times.

On October 2, the Fifth Circuit overturned a Texas district court ruling from August that had blocked the ambulatory surgical center provision of HB2—arguably the most onerous for abortion clinics—from kicking in on September 1, 2014. The appeals court decision left just eight clinics open in the state, all in metro areas, leaving nearly a million women more than 150 miles from their nearest clinic.

Today’s Supreme Court’s order blocked portions of the Fifth Circuit’s ruling that upheld HB 2’s surgical center provision, as well as the requirement that doctors performing abortions at McAllen and El Paso clinics must have admitting privileges at a nearby hospital.

Update (8/29/14):  Judge Lee Yeakel of the US District Court in Austin blocked a key provision of HB 2 today. This portion of the law, which required abortion clinics to meet the standards of hospital-like ambulatory surgical centers, was set to go into effect Monday, September 1.

The state of Texas has already announced it will appeal Judge Yeakel’s decision to the US Court of Appeals for the Fifth Circuit in New Orleans. This past March, the Fifth Circuit upheld a different provision of HB 2, reversing a block on the rule also issued by Yeakel.

At the new Planned Parenthood clinic in Dallas earlier this month, exam rooms were stocked, desks, chairs, and computers were installed, and even a few phones had started to ring. Construction workers came in and out, and the waiting room stood empty, save for a corner stack of moving boxes.

“We’re just waiting for furniture,” said Kelly Hart, senior director of government relations for Planned Parenthood of Greater Texas, while giving a tour of the clinic, which opened to patients two weeks ago.

This facility, a preexisting ambulatory surgical center that Planned Parenthood purchased and refurbished, will cost the organization $6.1 million. It’s an unexpected bill they’ve spent months fundraising to cover, because a year ago, Planned Parenthood had no plans for a new Dallas facility: A different clinic already provided safe, legal abortions and vasectomies to patients.

But come next week, abortions can no longer legally be performed at that old facility thanks to HB 2, the omnibus abortion bill that made national headlines last summer after Texas Sen. Wendy Davis’ 11-hour filibuster. The law requires that abortions—though not vasectomies—be performed in ambulatory surgical centers, hospital-like facilities that specialize in outpatient surgery. This provision goes into effect on September 1.

Ahead of this deadline, women’s health care providers have raced to meet HB 2’s burdensome requirements, spending millions of dollars and countless hours of fundraising and construction labor. Converting a medical facility into a full-blown ambulatory surgical facility can be very expensive. Texas has 114 pages of regulations governing ASCs, which mandate wide, gurney-accommodating hallways, larger operating rooms, and sterile ventilation. According to one Texas provider, it will cost them about $40,000 more each month to operate an ASC than it would a regular clinic.

In the face of the law’s requirements, all but eight abortion clinics in the state will close by September 1. Many were forced to lock their doors earlier this year as other HB 2 provisions went into effect, including a rule that required doctors to have admitting privileges at a hospital within 30 miles of where they perform abortions by the end of October 2013. 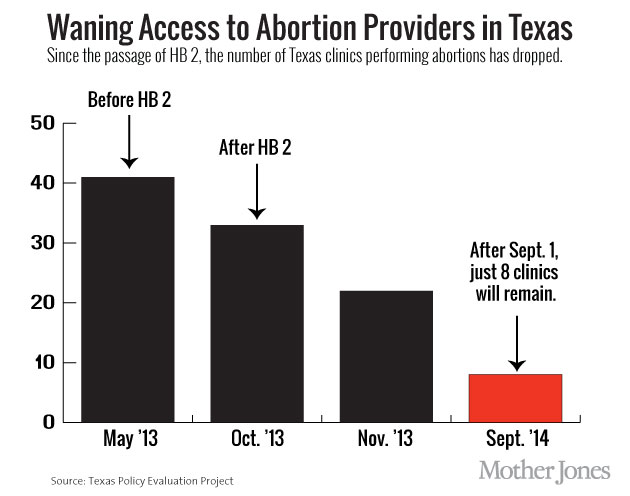 While supporters of HB 2 argue that the ASC requirements are vital for women’s health and safety, medical groups, including the American College of Obstetricians and Gynecologists, have repeatedly noted that typical doctor’s offices are fully able to perform medically safe abortions, and that ASCs do little to enhance the standard of care. (Texas has required that second-trimester abortions take place in ASCs since 2003.)

Come September 1, about 750,000 Texas women will live 200 or more miles from the nearest abortion provider. There were only 10,000 women in that situation just a year ago.

Several organizations have spent the past year trying to comply with the law, despite the extreme costs.

Planned Parenthood raised money to open two new ambulatory surgical centers—the refurbished one in Dallas, and another in San Antonio. Together, they will cost almost $13 million.

In San Antonio, the group is building a new ASC, but still needs to raise $1.2 million of its $6.5 million price tag. The facility won’t be done by September 1, says Mara Posada, communications director for Planned Parenthood South Texas. While they hope it will be completed by 2015, in the meantime, the San Antonio affiliate has arranged to provide abortion care a few days a week at another local ASC.

Having seen similar provisions become law in other states, Planned Parenthood took the precaution of building its Fort Worth clinic to ambulatory surgical center standards: “We knew that there were those in the Legislature who would like to see such regulations here in Texas,” Hart says. Planned Parenthood’s existing facilities in Houston and Austin will also be able to remain open.

Planned Parenthood of Greater Texas—which serves patients in Dallas, Fort Worth, Austin, and several other cities—is raising $2 million for an assistance fund that will help women who live far from abortion providers pay for travel and lodging. Other affiliates in Texas are putting together similar funds, as is Fund Texas Choice, a nonprofit.

Texas Women’s Reproductive Health Initiative, a group founded a year ago in direct response to HB 2, announced plans to build two ASCs, but is still raising the necessary money.

In 2011, the Legislature cut Texas’s biannual family planning budget by two-thirds, from $111 million to just $37 million. Historically, this money helped cover or subsidize the cost of preventive care for women—everything from annual exams to STI-testing or cervical cancer screenings—for low-income and uninsured women.

“It’s unfortunate that so much focus and attention has been given to something that makes up less than 10 percent of our services,” says Posada. “But it’s at the core of our mission that women have the fundamental right to make this personal decision for themselves. So we’re going to comply with the law.”

But for other providers in Texas without Planned Parenthood’s brand name and donor network, the costs of complying with the law have been insurmountable. This year, Whole Woman’s Health, a company that used to run five Texas abortion clinics, tried to buy an ASC. They found a willing seller in Fort Worth, but were unable to secure a loan.

“It can cost upwards of $2-$3 million per facility,” says Fatimah Gifford, the business’s public relations director. “The entire process has been painstaking. It’s been hard, because we want to remain open. But this law has proven to continue to decimate access throughout the state.”

“There’s also the opportunity cost of basically dedicating two to three staff members to searching for ASCs throughout state—that took them out of the operational jobs,” Gifford says. “We run clinics. We’re not advocates. We have to continue to run even though we’re fighting these laws.”

Now Whole Woman’s Health, along with other providers and advocates, has taken the state to court over the new provisions—twice.

The plaintiffs are seeking an order that would prevent them from having to spend millions of dollars on renovations or new construction to meet ASC requirements. A ruling is expected before the September 1 deadline, but Gifford anticipates that either side will appeal to the Fifth Circuit if they lose in Austin.

“We understand that we have to continue to fight back against laws that are medically unnecessary and completely decimating women’s healthcare,” Gifford says. “This is bigger than Texas.”