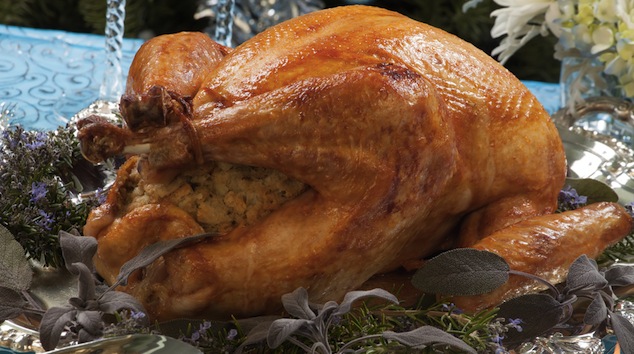 It’s becoming a Thanksgiving tradition as hoary as NFL football or the bloviations of your drunken uncle: days before the national feast, an animal-welfare group releases an undercover video documenting vile conditions within industrial-scale turkey facilities (see 2013, 2012, 2008).

This year, the largest turkey producer of all, Butterball—which churns out a billion pounds of turkey meat annually, a fifth of US production—has made a bold move to get ahead of these appetite-snuffing PR debacles. By fall 2014, presumably in time for Thanksgiving, all of its products will bear the American Humane Certified label, the company announced Tuesday.

The certifier is the American Humane Association, which calls itself the “first welfare certification program in the United States to ensure the humane treatment of farm animals.” The group’s standards for turkey production (PDF) place limits on stocking density (birds per square foot) and ammonia level (from manure storage) in the buildings, and also place stipulations on common industry practices like beak and toe trimming.

The American Humane Association’s scientific advisory committee includes animal-welfare stalwart Temple Grandin, as well as several professors from agriculture-centered universities like the University of Arkansas and the University of California-Davis. But it also includes a rep from Zoetis Animal Health, an animal-drug giant that was recently spun out of pharma behemoth Pfizer.

So what does the shiny label on the package mean for the millions of Butterball turkeys now being fattened for the holiday table?

Consumer Reports, which issues report cards on food labels, rates the American Humane Certified stamp “somewhat meaningful.” The label requires producers to follow basic standards, CR found: adequate food and clean water and ensuring that the animals are “free from pain and unnecessary stress.'” However, it added, “many of the requirements in the American Humane standards mirror the conventional industry’s practices, and livestock producers do not have to meet all of the requirements to be certified.”

Paul Shapiro, vice president for farm-animal protection for the watchdog group Humane Society of the United States, gave an even harsher assessment: “It’s an industry-friendly standard that doesn’t really differ from what the industry is already doing,” he told me.

Shapiro points out the standards allow the birds to be confined inside, with zero access to the outdoors. And he says that the stocking density requirement—1 square foot of space for every 7.88 pounds of bird—is “very close” to the prevailing industry standard. I haven’t been able to track down the industry standard stocking density for turkeys. But Consumer Report’s assessment backs Shapiro up—it gives the American Humane indoor space standard 2 out of 4 possible points, suggesting only a minor improvement over prevailing conditions.

The new rules still allow producers to burn off their birds’ beaks to prevent cannibalism—which tends to arise only when birds are confined with nothing to do.

And the rules “encourage” but don’t require producers to provide “enrichment”—the animal-welfare term for conditions that allow animals to partake of natural behaviors, Shapiro notes. An example of low-cost enrichment that would be appropriate for confined turkeys would be straw bales, which would give birds a place to climb or hop to. “Under these standards, the birds still have nothing to do but eat and sleep,” he said.

As for the egregious practice of beak trimming—which is typically done by burning—Shapiro points out that the standards don’t ban it. They merely require that producers have a beak-trimming policy in place, and forbid trimming to improve feed efficiency. But they allow producers to burn off their birds’ beaks to prevent cannibalism, which according to Shapiro, tends to arise only when birds are confined with nothing to do.

To back his point that the standards aren’t stringent enough to affect conditions in any substantial way, Shapiro points out that California’s Foster Farms won the Humane Certified label for its massive chicken operations in March 2013—the very month the company became embroiled in a massive, year-long antibiotic-resistant salmonella outbreak.

Of course, animal-welfare standards aren’t directly related to food safety issues like salmonella-tainted meat, but stringent limits on ammonia levels and stocking density might improve sanitary conditions, on the theory that stuffing a bunch of large birds together over their own waste is an ideal way to breed pathogens. But things were so foul at one Foster Farms chicken facility in California that, in January, the US Department of Agriculture temporarily suspended operations, citing “egregious insanitary conditions,” including “an infestation of live cockroaches in and around your production areas.” Oof.

I contacted the American Humane Association to ask what practices Butterball had to change in order to win certification. In an emailed statement, a company spokesperson replied that the turkey giant has “made several changes and now meet our nearly 200 extensive and rigorous science-based welfare standards covering everything from food, water, lighting, warmth, air quality, adequate space, and the ability for the animals to engage in natural behaviors.”

Pressed for specifics, the spokesperson responded that “you may want to reach out directly to Butterball.” I have, and am awaiting a call back, and will update this post when I hear back.

In the meantime, I asked Shapiro what labels the Humane Society considers rigorous. He pointed me to Global Animal Project’s 5-Step rating system as a model standard for supermarket meat. He added that the Animal Welfare Approved label is “excellent,” but that it is too stringent for supermarket-scale producers. “It works for farmers markets and small co-ops,” he said.

Consumer Reports, for its part, has ratings on all the major animal-welfare labels. In addition to the two mentioned by Shapiro, CR also rates the Certified Humane label “meaningful.”