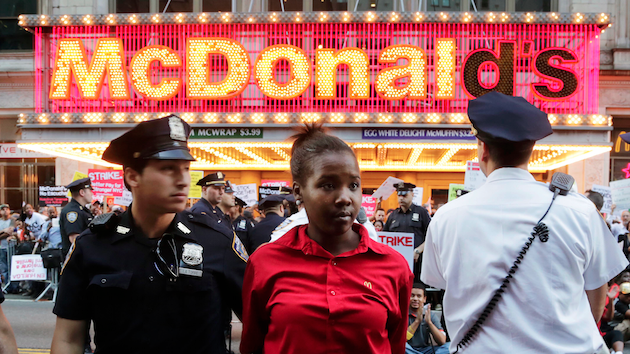 Police officers arrest a protester in front of a McDonald's restaurant in New York's Times Square on Thursday.Mark Lennihan/AP

On Thursday, nearly two years after fast-food employees first walked off the job in New York City, workers in dozens of cities around the country are staging a new round of strikes aimed at winning workers a $15 minimum wage and the right to form a union. This spate of walk-outs will see a significant escalation in tactics: home healthcare workers will join the day of action, and some workers will engage in civil disobedience. Several have already been arrested.

“On Thursday, we are prepared to take arrests to show our commitment to the growing fight for $15,” Terrence Wise, a Kansas City Burger King employee and a member of the fast-food workers’ national organizing committee, said in a statement earlier this week.

Employees at restaurant chains including McDonalds, Pizza Hut, and Burger King are walking off the job and staging sit-ins in 150 cities nationwide, from Chicago to Oakland, Pittsburg to Seattle. During the last one-day strike in May, workers protested in 150 US cities and 80 foreign cities, forcing several franchises to close for part of the day.

So far, the massive chains have been resistant to bumping up workers’ wages. Nevertheless, the movement has dealt some serious setbacks to one of the biggest fast-food employers: McDonald’s. The company’s public image was tarnished significantly between 2013 and 2014, according to a recent study quantifying companies’ reputations. McDonald’s sales have fallen over the past year amid ramped up scrutiny from Congress over its poverty wages. And in July, the National Labor Relations Board ruled that McDonald’s corporate can be held liable in worker lawsuits over wage-theft and working conditions. (The company had been arguing that it does not exert significant control over its franchises’ employment practices.)

The Service Employees Industrial Union, which has backed the workers from the start, hopes the addition of some of the nation’s 2 million home healthcare aides to the growing movement will put additional pressure on states and localities to raise their minimum wage.

On Labor Day, President Barack Obama gave the fast-food worker movement a morale boost. “All across the country right now there’s a national movement going on made up of fast-food workers organizing to lift wages so they can provide for their families with pride and dignity,” the president said. “There is no denying a simple truth. America deserves a raise.”