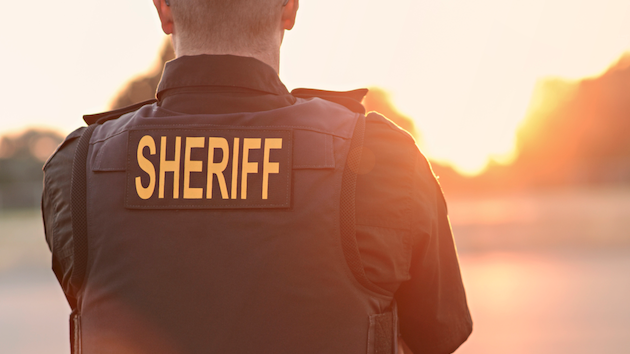 As DeKalb County, Alabama, prepares to elect its next sheriff, one local Republican has taken it on herself to ask voters a tough question: In the likely scenario that President Obama suspends the 2016 elections and seizes dictatorial power, can the local citizens count on a Democratic sheriff to oppose him?

Betty Mason, a Republican donor who is married to a longtime leader of Alabama’s Republican Party, posed the question in a letter she mailed last week to voters in DeKalb County, which covers a rural community in the northeast corner of the state.

“Obama is determined to be a dictator with the executive orders he signs,” she wrote. “He has left the US Constitution in shreds. If Obama decides to run again (against US law) or declares a National Emergency to suspend elections in 2016, what will our Democrat sheriff do? I am concerned he will go along with this lawless president.”

The county’s current sheriff is Jimmy Harris, a Democrat, who is running for reelection. Mason encouraged voters to support his challenger, Republican Rex Leath, who is the assistant police chief of Collinsville. “Leath has pledged to defend our citizens even against a lawless President,” she declared.

Mother Jones asked Leath if he shares Mason’s concerns about the president’s autocratic aspirations. “Oh, I sure do,” he says. “I would hope every American in the country would…I don’t really know what he is capable of doing at this point. If martial law is declared by the president, he can’t be removed from office.”

Here’s a copy of the letter, which was tweeted by a local resident: 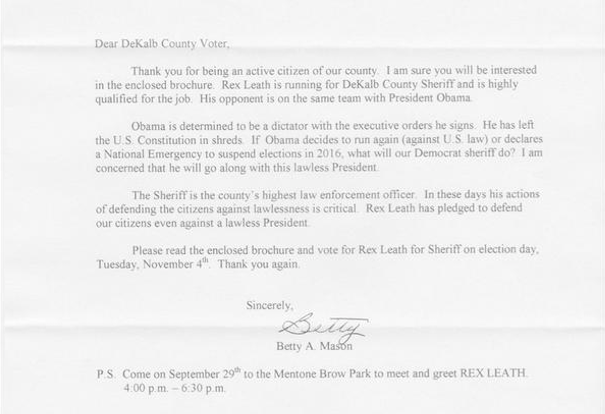 Mother Jones couldn’t reach Mason, but her husband, Frank Mason, confirms that she wrote the letter. He added that the couple helped Leath organize the campaign event referred to at the bottom of the letter.

“Based on what [Obama] has done, I don’t know what he might do,” Frank Mason says. “I just don’t really know.”

Leath didn’t know in advance that Mason was writing to voters—but he says she’s glad he did. “It was a very sweet letter,” Leath says. “Very well written.”