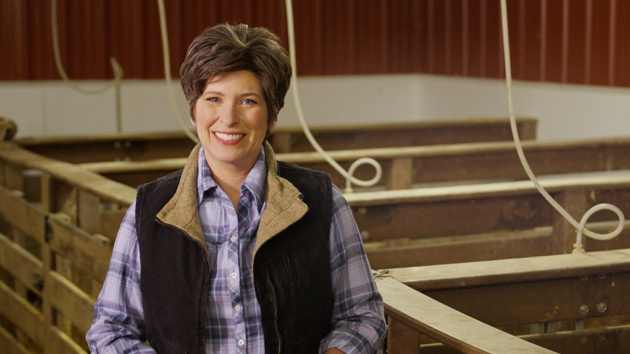 This year’s Iowa Senate race—a key contest that could determine whether Republicans gain control of the upper body—has so far not been shaped by titanic policy issues. Instead, farm animals have played a larger role. GOP state Sen. Joni Ernst, who is up against Democratic Rep. Bruce Braley in this much-watched face-off, got a boost from an ad in which she bragged about castrating hogs. Braley has been hurt by the news that he allegedly threatened* a lawsuit against a neighbor whose chickens had wandered into his yard. Ernst has accused Braley of sexism for including stock footage of baby chickens—i.e., “chicks”—in an ad that asserted she had not made a “peep” about cutting government pork.

This may not be shocking for a Senate race in the Hawkeye State. But what is surprising is that the campaign has not been much affected by a series of controversial, extreme, or just plain dumb remarks Ernst has made—and her subsequent denials that she said them.

Here are a few examples of Ernst’s out-there statements:

All of us agreed that Agenda 21 is a horrible idea. One of those implications to Americans, again, going back to what did it does do to the individual family here in the state of Iowa, and what I’ve seen, the implications that it has here is moving people off of their agricultural land and consolidating them into city centers, and then telling them that you don’t have property rights anymore. These are all things that the UN is behind, and it’s bad for the United States and bad for families here in the state of Iowa.

The minimum wage is a safety net. For the federal government to set the minimum wage for all 50 states is ridiculous…The standard of living in Iowa is different than it is in New York or California or Texas. One size does not fit all.

“We don’t know that there were weapons on the ground when we went in,” she said, “however, I do have reason to believe there were weapons of mass destruction in Iraq.” When a Register reporter quizzed her on what information she has, Ernst said, “My husband served in Saudi Arabia as the Army Central Command sergeant major for a year and that’s a hot-button topic in that area.”

Ernst is hailed by supporters as a straight-talking candidate who will stick to her conservative principles. But throughout this campaign, she has been quick to walk away from her most bizarre statements as soon as she’s challenged on them.

When asked by Yahoo News last month about her suggestion that an international cabal would relocate her constituents to Des Moines, Ernst said, “I don’t think that the UN Agenda 21 is a threat to Iowa farmers.” When asked about impeachment in July, she insisted, “I have not seen any evidence that the president should be impeached.” She added that “obviously” the president is not a dictator. In June, referring to the federal minimum wage, she said that, contra whatever she said earlier that month, “I never called for the abolishment of it. Never.” In May, she walked back her weapons of mass destruction claim and conceded that Iraq had none at the time of the US invasion. Recently, Ernst attacked Braley for proposing an adjustment to the Social Security retirement age, while simultaneously making an identical proposal herself.

It’s Braley’s poultry-related gaffes—and not Ernst’s Palinesque positions and subsequent clarifications—that have made the biggest political dent; the most recent poll of the race found Ernst with a 6-point edge. It’s just easier to understand a claim about someone’s character than it is an international conspiracy. “Something like Agenda 21—who knows about that?” says Tim Hagle, a political scientist at the University of Iowa. “But they understand the idea that my neighbor is suing me over chickens.”

*Correction: This piece originally stated that Braley had sued his neighbor.