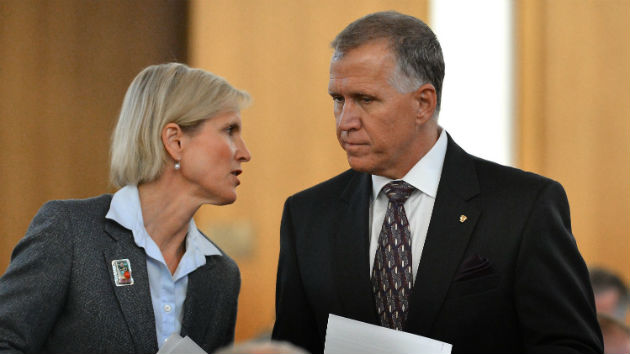 In 1898, furious that a mixed-race coalition had swept the city’s municipal elections, white supremacists burned down a black-owned newspaper in Wilmington, North Carolina; overthrew the local government; and killed at least 25 black residents in a week of rioting. It was one of the worst single incidents of racially motivated violence in American history. But in 2007, when a nonpartisan commission recommended that the state legislature pass a resolution formally apologizing for the massacre, Republican Senate nominee Thom Tillis, then a first-term state representative, rose to block it.

“It is time to move on,” he wrote in a message to constituents. “In supporting the apology for slavery, most members felt it was an opportunity to recognize a past wrong and move on to pressing matters facing our State. HB 751 and others in the pipeline are redundant and they are consuming time and attention that should be dedicated to addressing education, transportation, and immigration problems plaguing this State.”

But at the time, Tillis—who showed up in Wilmington on Tuesday with New Jersey Governor Chris Christie in tow—offered another explanation for opposing the measure: Not all whites had participated in the riots. So Tillis pushed for an amendment introduced by a fellow state representative that would have added language to the bill commemorating the heroic white Republican lawmakers who had opposed the violence. “The proposed amendment would have acknowledged the historical fact that the white Republican government joined with black citizens to oppose the rioters,” he argued. The amendment failed, and Tillis ended up voting no on the final version.

Although North Carolina has been targeted by the GOP as a top pickup opportunity, Tillis has struggled to gain traction—in part because of his leadership role in the unpopular state legislature. In the most recent poll, he trailed Kay Hagan, the Democratic incumbent, by nine points.