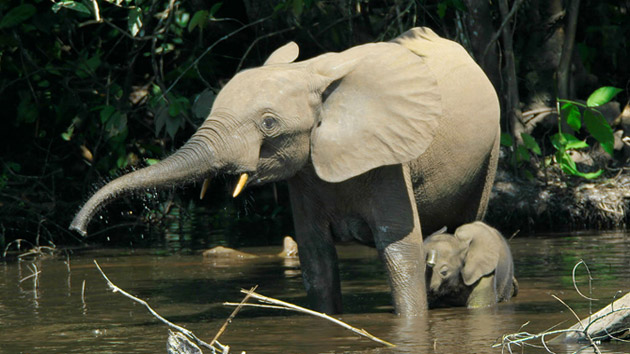 The forest elephant population has fallen by more than 60 percent since 2002, according to research cited in a new World Wildlife Fund report.<a href="http://commons.wikimedia.org/wiki/File:Loxodontacyclotis.jpg">Thomas Breuer</a>/Wikimedia Commons

Global wildlife populations have declined by a stunning 52 percent over the past four decades, and humans are largely to blame.

That’s according to a newly released study conducted by the World Wildlife Fund and the Zoological Society of London, which analyzed an index of 10,000 different animal populations (referred to in the study as the Global Living Planet Index) comprised of more than 3,000 species of vertebrates, a group of animals that includes mammals, reptiles, fish, amphibians, and birds.

The most severe decline was experienced by freshwater species, whose populations fell a shocking 76 percent—nearly twice the rate experienced by marine and terrestrial species (both of which dropped by 39 percent). The most significant reductions in wildlife occurred largely in the tropics, especially in South America.

“This damage is not inevitable but a consequence of the way we choose to live,” said the Zoological Society’s Ken Norris, according to the AP. “There is still hope. Protecting nature needs focused conservation action, political will and support from industry.”

While Norris’ message leaves room for a bit of encouragement, it remains to be seen if the WWF’s latest data will spur significant political action, particularly in light of the upcoming United Nations climate change and sustainability meeting in 2015.