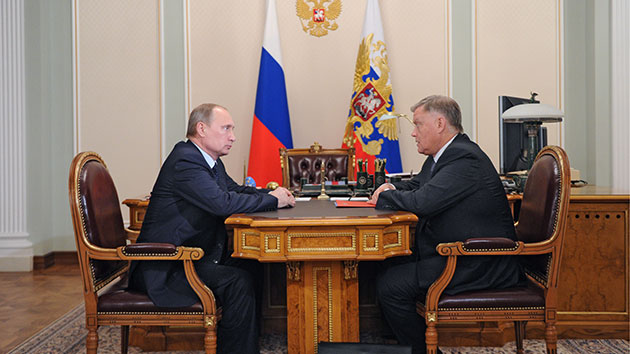 This Wednesday, activists from around the world will gather in Moscow for a conference titled “Large Families: The Future of Humanity.” The gathering in the Russian capital will focus on defending “the way of life of large families” and includes workshops on topics such as the “natural family” and the role of media in promoting “the values of a traditional family.”

Originally, the World Congress of Families had scheduled a similarly titled conference, “Every Child A Gift: Large Families, the Future of Humanity,” to take place in Moscow this week. The Illinois-based WCF, as I have reported previously, has promoted anti-gay and anti-abortion policies around the globe, perhaps most actively and successfully in Russia. WCF has helped host at least five major gatherings in Russia since 2010, providing venues for American evangelicals to present their ideas to Russian legislators, religious leaders, and activists.

Yet in July, after the United States and the European Union leveled economic sanctions against Russia in response to its incursions into Ukraine, WCF canceled its Moscow confab, citing “uncertainties” due to the new rules and the “possible liability arising therefrom.” These were legitimate concerns: Two of the WCF’s key Russian allies had been placed on a list of individuals sanctioned by the Treasury Department, making conference planning complicated, and possibly forbidden.

When Mother Jones contacted WCF, Jacob and Feder were still on the list of organizers with the sanctioned Mizulina. Two days later, the list disappeared.

However, the upcoming Large Families conference looks a lot like a barely rebranded version of the original WCF event. Beyond its nearly identical title, the new conference will take place in the same location, on the same dates, and with a similar schedule, according to research by the Human Rights Campaign. This week’s event also advertised some of the same organizers as the scrubbed meeting: WCF managing director Larry Jacobs and WCF communications director Don Feder were listed on the forum’s seven-member organizing committee.

As of last Friday, when Mother Jones asked WCF for comment, Jacob and Feder were still on the list of organizers. By Sunday, the committee list had disappeared from both the English and Russian versions of the website of the Istoki Fund, an endowment run by Vladimir Yakunin, a close adviser to President Vladimir Putin who codirects several of the conference’s sponsoring organizations. The original page, including the committee list, is archived here. A copy of the original press release on the site of another Yakunin-affiliated conference sponsor has also vanished. (Here’s the Russian original.)

Also on the committee list was Elena Mizulina. In March 2014, the Treasury Department’s Office of Foreign Assets and Control (OFAC) sanctioned several dozen top Russian government officials including Mizulina, a member of parliament, and Yakunin.

Both Mizulina and Yakunin are among WCF’s heartiest supporters. Mizulina sponsored both pieces of anti-gay legislation that caused international uproar in the run-up to the Sochi Winter Olympics in February. WCF has expressed support for these laws. She has met repeatedly with Jacobs, has attended a number of WCF’s Russian events, and has invited a WCF planning committee member to speak before Duma members about anti-gay policies.

The billionaire Yakunin helped pay for the 2011 Moscow Demographic Summit, the WCF’s first major conference in Russia. Last spring, he launched Istoki, a fund that backs three charities—two co-run by him, and a third headed by his wife, Natalia. All three organizations have ties to WCF’s work in Russia. Three of the Large Families conference’s five sponsors are affiliated with Yakunin: the Sanctity of Motherhood Foundation, the Center for National Glory, and St. Andrew the First-Called Foundation. The latter two are run by Yakunin and all three are funded by Yakunin’s Istoki fund.

Yakunin and Mizulina are currently on OFAC’s Specially Designated Nationals and Blocked Persons list. Once someone is on the list, American citizens and businesses “are generally prohibited from dealing with them,” according to OFAC, which administers economic and trade sanctions. Sanction rules hinge on what counts as “dealing” with an SDN, which isn’t clearly defined. “If a US individual or entity wanted to deal with a sanctioned entity on the SDN list, we would encourage them to reach out to OFAC for guidance on a case-by-case basis,” a Treasury spokeswoman told Mother Jones. “Generally what is prohibited are ‘dealings’ with SDNs. Doing business or doing transactions—all of that is covered in the regulations. But dealings is a general term.” She said that the agency does not comment on specific cases.

“If this were my client, I would advise them to pull out of the joint planning committee immediately,” says an expert on international sanctions.

“The Office of Foreign Assets and Control has incredible discretion, so we always urge caution when interpreting these types of terms,” says Eric Lorber, an associate attorney at Gibson, Dunn & Crutcher who has written extensively on international sanctions.

Lorber says it’s not possible to determine whether WCF is in violation of the sanctions without full knowledge of what exactly Jacobs and Feder are doing to assist Mizulina and Yakunin and what benefits, financial or otherwise, WCF or the Russians may be receiving. “What they are doing is extremely risky,” he writes in an email. “It depends on the specifics of the circumstances, but there definitely are possible routes for those folks to violate US sanctions on the SDNs.” He concludes, “If this were my client, I would advise them to pull out of the joint planning committee immediately.”

Some World Congress of Families personnel plan on attending the conference and supporting our Russian civil society friends who are working to protect the unborn child and the natural family. Though some of us will be present, as was agreed by the International Planning Committee many months ago, the WCF is not financially supporting the conference in Moscow this week and we have not lent our name to what should be a very interesting conference.

In another statement sent to Mother Jones, Jacobs wrote that “WCF Communications Director Don Feder and I will be there to attend and speak as individuals and not as representatives of the World Congress of Families.”

However, Jacobs and WCF did not respond to questions about his or Feder’s apparent participation in the organizing committee. They also did not respond to requests for clarification on what sort of interactions Jacobs or Feder may have had with Mizulina or Yakunin. They also did not answer questions about whether they have asked OFAC for guidance on obeying the sanctions.

Interacting with the conference’s cosponsors, particularly Yakunin’s foundations and the endowment fund that supports them, isn’t necessarily prohibited by sanctions. It depends on whether Yakunin maintains 50 percent ownership of any of the groups, as well as several other factors, explains Lorber. “Merely dealing with the entities that are run by an SDN…wouldn’t be a problem,” he notes. “However, if, in the course of those dealings, the WCF employees had any dealings with Yakunin (such as having him participate in negotiations or exchanging anything of value with him), that activity would be sanctionable.”

WCF will not have to contend with diplomatic intrigue and sanctions as it plans its next international meeting. Shortly after canceling its event in Moscow, it announced that its 2015 international conference will be held in Salt Lake City. In his email, Jacobs clarifies that just as the WCF’s work in other countries isn’t an endorsement of their governments, “our presence there should not be construed as supporting all of the policies of the Obama Administration.”