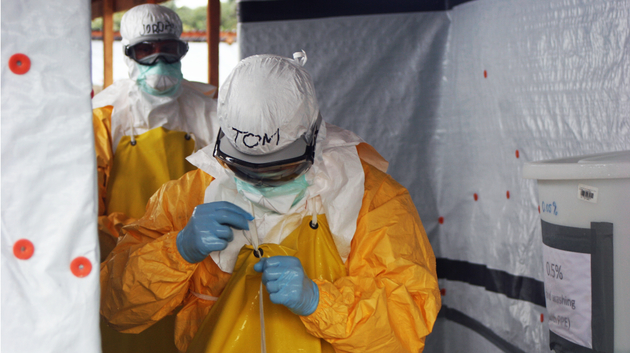 The Centers for Disease Control and Prevention say that a hospital worker who cared for Thomas Eric Duncan, the Liberian patient who died of Ebola last Wednesday, has tested positive for the Ebola virus. This is the first case of Ebola being transmitted in the United States. Officials blame a “breach of protocol” during treatment of Duncan—and although all healthcare workers who came into contact with Duncan were wearing protective clothing, Dr. Thomas Frieden, the CDC director responsible for overseeing agency action against the Ebola crisis, said additional cases are possible because of the breach.

Frieden did not disclose the specifics of the breach, but he did stress the importance of following isolation protocol. “The bottom line is we know how Ebola spreads,” he said a morning press conference. “We know how to stop it from spreading. But it does re-emphasize how meticulous we have to be on every single aspect of the control measures—from rapid diagnosis, to effective isolation, to effective care, with infection control, to scrupulous contact investigation.”

Frieden also said that “while this is bad news, it is not news that should bring about panic.” Health officials emphasize that the virus is not contagious during the incubation stage, which typically lasts 8-10 days. Ebola can only be contracted through direct contact with the bodily fluids of an infected person.

The Texas Department of State Health Serviced announced in a statement Sunday that, after the patient reported a fever Friday night, she was put in isolation and officials began the process of interviewing those with whome she had come into contact. One additional person has already been placed in isolation and another 18 are being closely monitored.

“We knew a second case could be a reality, and we’ve been preparing for this possibility,” said Dr. David Lakey, commissioner of the Texas Department of State Health Services. “We are broadening our team in Dallas and working with extreme diligence to prevent further spread.”