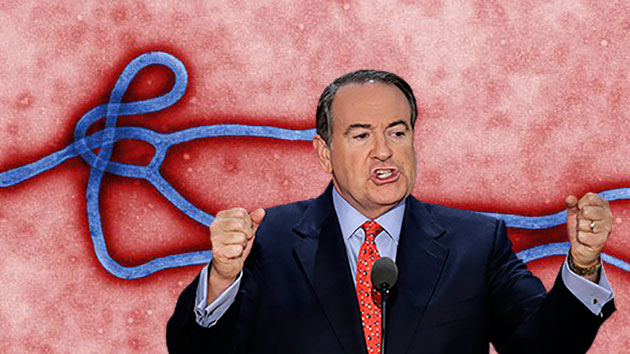 When a Texas hospital confirmed last week that it was treating a patient for Ebola, the Centers for Disease Control and Prevention dispatched teams to trace any people the patient had contact with, vowing to stop the disease “in its tracks.” But conservative politicians rushed to overreact. Here are a few of the lowlights:

Mike Huckabee, former governor of Arkansas and current host of Huckabee: “When the government says it can’t keep people out of the US, it means it won’t keep people out. And why should we be surprised? We’ve seen our borders routinely ignored, so if someone with Ebola really wants to come to the US, just get to Mexico, and walk right in.”

Bill O’Reilly, host, The O’Reilly Factor: “Thinking ahead, and taking precautions is simply responsible policy. Time and again, the Obama administration has failed to do that…There is no reason on earth, on this earth, that right now we should be accepting anyone in this country with a West African passport.”

Donald Trump, conservative gadfly: “Let’s not kid ourselves. I mean with the five billion dollar website for Obamacare, which is still not working, frankly, and it’s a disaster. And so many other things: Benghazi, wars…IRS.”

Rush Limbaugh, host, The Rush Limbaugh Show: “The people in Liberia only went there because they had to get out of here ’cause they were slaves…Therefore if Ebola ends up here, it’s only payback, folks…Unfortunately we have elected people in positions of leadership who think this way. The president is one of them.”

Mark Levin, host, The Mark Levin Show: “Of course we should profile! It doesn’t have to be based on race or anything of that sort. We have a right as a people in this country— it’s our right…our country! We have a right to say ‘No’ temporarily— or permanently— to people coming into this country from certain parts of the world, so that our families, our children, our grandchildren, our society, isn’t at risk. That’s just natural…and yet the opposite goes on here.”

Michelle Malkin, syndicated columnist: “In the wake of the Ebola scare (not to mention renewed jihadi threats from abroad), worried Americans are heading to the drugstore to stock up on face masks, hand sanitizer, and gloves. New vaccines are in the works for emerging global contagions. Unfortunately, there is no antidote for our government’s blind and deadly diversity worship. Political correctness is a plague on us all.”