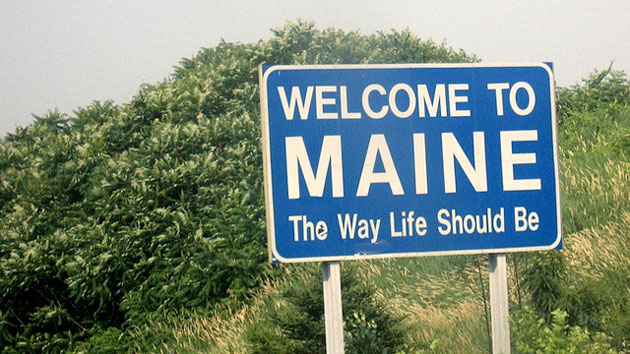 After a days-long battle with Maine governor Paul LePage, Kaci Hickox, a nurse who recently returned from treating Ebola patients in Sierra Leone, has officially won the right to go outside.

Earlier this week, LePage announced he would seek legal authority to forcibly quarantine Hickox—who has not exhibited symptoms of Ebola—in her home. LePage, a Republican, dispatched state police to “monitor” her house. However, in a series of orders issued Thursday and Friday, a state judge ruled that Hickox could leave her home and could not be barred from any public places.

Hickox, who had been working with Doctors Without Borders in Sierra Leone, was quarantined in a New Jersey hospital last weekend after a forehead scanner at the Newark airport indicated she had a temperature of 101 degrees. Fever is an early symptom of Ebola. But by the time she arrived at the hospital, doctors took another temperature reading and told Hickox she no longer had a fever, according to her own account. Since then, Hickox has been tested twice for Ebola. Both times, she tested negative for the virus. Since Ebola can only be transmitted by patients who are currently experiencing symptoms (and, of course, only if they actually have the virus), experts say Hickox presents little risk to others.

On Monday, New Jersey Gov. Chris Christie (R) released Hickox, allowing her to return to her Fort Kent, Maine, home. But in Maine, Hickox became the center of a political battle, as LePage—who is in a tight reelection fight—attempted to quarantine Hickox for the remainder of the 21-day Ebola incubation period. Maine’s director of Health and Human Services said that the state government would seek a court order to keep Hickox from leaving her home.

LePage’s proposed quarantine ran contrary to even the more stringent guidelines issued by the Centers for Disease Control and Prevention on Wednesday. According to those guidelines, health care workers who had treated Ebola-infected patients for prolonged periods while wearing protective gear but who do not exhibit symptoms should have their temperature monitored frequently—but they do not need to be forcibly quarantined. While local health authorities may consider barring returned health care workers from crowded public places, such as shopping malls and movie theaters, the guidelines say that movement in open areas outside their homes “may be permitted.”

Hickox had stated explicitly that she did not intend to observe the quarantine. On Thursday, she was seen biking around her neighborhood.

Members of Maine’s medical community strongly criticized the attempted quarantine. The Maine Medical Association issued a letter arguing that indiscriminate quarantines of returned health care workers “may be well intended” but that the policy “is not supported by the science or experience.”

“Unnecessarily quarantining these returning health care workers can have a devastating impact on the efforts to stop Ebola at its source and ultimately here,” the letter said.

The American Civil Liberties Union also opposed the quarantine. “There are legal standards that must be met before the state can hold Kaci Hickox or anyone else in custody,” Alison Beyea, executive director of the ACLU’s Maine office, said in a statement Wednesday. “In this case, we don’t believe the standard has been met. This is a rapidly changing situation. That makes it all the more important that the government remain transparent and even-handed, and make decisions based on medically sound science, not on fear.”

LePage’s Democratic challenger, Rep. Mike Michaud, initially appeared to endorse the governor’s actions. Queried about the issue on Wednesday, Michaud told reporters that “it’s the state’s responsibility to make sure people are protected here in the state of Maine for the public safety, and I support the 21-day quarantine.” He added that he believed that the government should rely on the guidance of health professionals to determine the duration of the quarantine.

Today, however, Michaud’s campaign told Mother Jones that he “supports a voluntary quarantine” and that it should be in line with CDC guidelines.

Medical experts aside, advocates of quarantines seem to have public opinion on their side. A CBS News poll released Wednesday found that 80 percent of Americans believe US citizens returning from West Africa should be “quarantined upon arrival” until authorities can be certain they do not have Ebola.