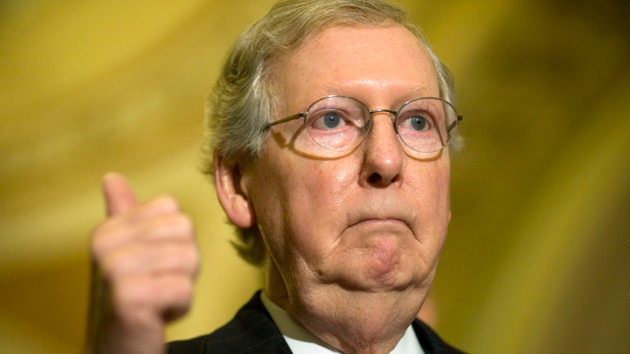 Mitch McConnell came prepared with a soundbite. The Affordable Care Act, the Republican Senate minority leader declared during a debate Monday, is “the worst piece of legislation in the last half-century,” and needed to be pulled out “by the roots.” But when it came to actually getting rid of the law—specifically Kynect, his state’s popular new insurance exchange, and the associated expansion of Kentucky’s Medicaid rolls—McConnell’s tough talk began to fade.

“With regard to Kynect, it’s a state exchange, they can continue it if they’d like to,” he said. He went on: “With regard to the Medicaid expansion, that’s a state decision, the states can decide whether to expand Medicaid or not.” When asked, once more, if he supported the state’s decision to create Kynect and expand Medicaid, McConnell finally conceded, “Well that’s fine, yeah. I think it’s fine to have a website.”

McConnell, one of his party’s loudest voices against Obamacare, could barely put together a sentence when pressed on the specifics of what he’d do about it. And he isn’t alone. At a Senate debate in Arkansas on Monday, GOP Rep. Tom Cotton, who is challenging Democratic Sen. Mark Pryor, talked tough about repealing “Obamacare,” but when asked directly, declined to say whether his state’s version of Medicaid expansion, known as the “private option,” ought to get the boot. (In not answering the question, he did manage to say “Obama” 13 times in two minutes.) This has been Cotton’s approach to the question for months now, and it’s not hard to see why he’s so cautious—the private option was approved by a Republican-controlled state legislature and even has the backing of his party’s gubernatorial nominee, former Rep. Asa Hutchinson.

And in Iowa on Saturday, GOP state Sen. Joni Ernst, who is seeking the Senate seat being vacated by Democrat Tom Harkin, was asked by a man who had received insurance through the Affordable Care Act about how she’d propose to keep him insured after the law is repealed. She ignored the question.

The GOP is still poised to win big in November. McConnell, Cotton, and Ernst all lead in the polls. But four years after the passage of Obamacare, Republicans are finding it harder and harder to say what they really think about it.