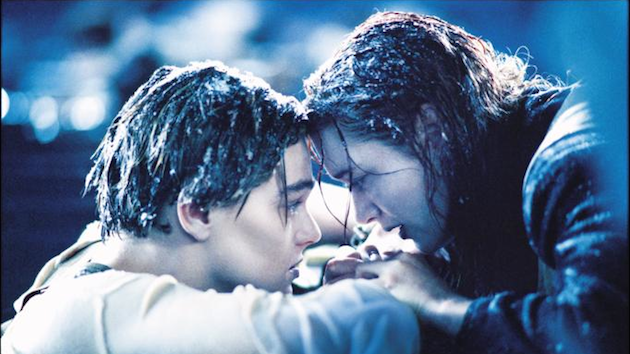 Titanic is a deeply flawed film. The dialogue is atrocious. The characterizations are thin. The plot ain’t anything we haven’t seen before. Even the visuals—once heralded as revolutionary—look sort of pedestrian now. (Of course, that’s the trouble with being revolutionary. You look like everybody else that comes after you.) Still, I love it. It’s a jaunt. It’s a ride. It’s a song and a grand, immense emotional experience. It’s what Hollywood does best, really.

But for me, the most unforgivable bit of Titanic has always been the end. Refresher: We’re back in the framing device with the old lady and her granddaughter aboard Bill Paxton’s ship. It is revealed that the old lady has had the jewel the entire time and has really only come aboard the treasure hunting ship so that she can throw it off the bow and lay it to rest down with Jack. This is stupid. That jewel is worth a fortune! Throwing it into the ocean is like setting money on fire. Even if you don’t want to live in luxury because of some Titanic-related guilt, you should still sell the jewel and give the proceeds to some worthy cause: charity! Your children’s education! Whatever! Throwing the jewel in the water is an act of selfish self-aggrandizement that puts old lady Rose firmly in the inconsiderate jerk camp. (Youthful Rose has long been a resident.) Homeless people are going hungry because Rose wanted some meaningless moment with the sea.

So, I was eager to watch the newly unearthed “alternate ending.” (It was apparently an extra on a 2005 DVD release of the film but millennials don’t watch DVDs and the internet only now became aware of its existence.) Does she sell the diamond and go to Beverly Hills and have a Pretty Women moment? Maybe she funds some orphanage for Dickensian youth? Maybe she created a scholarship fund in Leonardo DiCaprio’s name and blah blah blah. She does none of those things. Instead, this ending actually makes it worse.

No longer is Rose solely responsible for this little act of wealth destruction, but she makes complicit Bill Paxton, a treasure hunter. Bill Paxton, who has convinced investors to fund his expedition to find this stupid diamond. Bill Paxton, who lives in the world as it exists and not some Technicolor fantasy. In the new ending, Paxton has the chance to stop her from throwing the thing overboard. She puts it in his hand. He holds it. He becomes ensorcelled by the romance and lets her toss it off the boat and into the sea while one of his shocked minions runs around like an extra with his head cut off.

Where does Bill Paxton go from here? After the stone sinks to the ocean floor, he looks to Rose’s granddaughter and hints that maybe they should date, but he’s going to have a rough go of it finding time to wine and dine her once his backers learn about what he’s done and hit him with a bill for many millions of dollars. Titanic 2 is a courtroom drama set around Bill Paxton’s bankruptcy hearing. Bill Paxton’s life is now ruined. Let’s go further. Rose’s granddaughter’s life is also ruined. Her granddaughter and Bill seemed to really be hitting it off at the end and one of the rules of Hollywood movies is that if two people are flirting and hitting it off at the end of a film then the audience can assume that they immediately get married after the credits roll and are happy for the rest of time and laugh together and eat brunch together and sip champagne and feed each other strawberries together and die within minutes of each other decades later in one another’s arms because a life without the other isn’t a life worth living. That future—that destiny, the right of every romance film character—is not in the cards for Rose’s granddaughter if Bill throws that jewel into the sea. Rose sacrifices her granddaughter’s future bliss for some stupid romantic nonsense.

Rose is a monster.