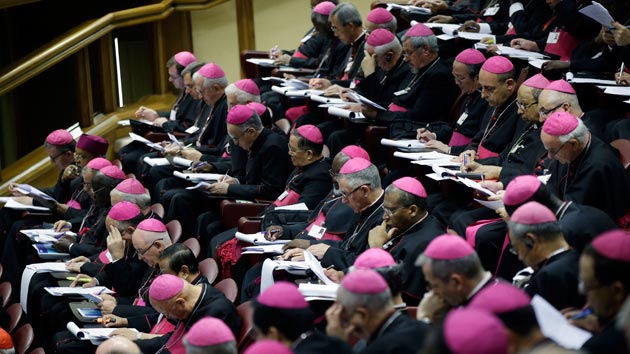 Bishops at the synod on family issues at the Vatican.Gregorio Borgia/AP

Update, Saturday, October 18, 2014: Never mind: “A final statement agreed to on Saturday by a summit of Catholic Church leaders to discuss teachings on family retreated from groundbreaking language on “welcoming homosexual persons” included in an interim draft released on Monday.”

A preliminary document released by the Vatican today suggests a possible easing of the Catholic Church’s strict stances on premarital cohabitation, homosexuality, and divorce and remarriage. Summarizing the first week of discussion at a worldwide meeting of bishops, the document stresses the need for church leadership to listen “with respect and love” and “appreciate the positive values” of members “rather than their limitations and shortcomings.”

The document is not an indication of change in doctrine, but more of a recap of what has been discussed so far at the two-week long synod on family issues, and what’s on the agenda in the second week of meetings. The synod was both convened and attended by Pope Francis. Among the topics mentioned in the document are the “positive aspects of civil unions and cohabitation,” and the importance of including Catholics who are divorced or remarried while “avoiding any language or behavior that might make them feel discriminated against.”

The document also encourages churches to welcome and accept gay people, who “have gifts and qualities to offer to the Christian community.” This “welcoming” has its limitations: The document maintains that “unions between people of the same sex cannot be considered on the same footing as matrimony between man and woman.”

Overall, however, the document’s tone contrasts with statements from Pope Francis’ predecessor, Pope Benedict XVI, who called gay marriage a “threat to world peace” and damaging to “the essence of the human creature.” And not once does it refer those who are divorced or living together before marriage as sinners.

The document quotes previous writings by Pope Francis, stating: “The Church is called on to be ‘the house of the Father, with doors always wide open…where there is a place for everyone, with all their problems.'”

The Vatican’s baby steps toward discussion and inclusion appear to reflect the frustration among many Catholics toward the church’s traditional stances on family issues and gay rights. Last week, a poll of American Catholics found 40 percent believe the church should drop its opposition to premarital sex and cohabitation (33 percent say it should not), and 42 percent believe the Church should recognize same-sex marriage (40 percent disagree). The poll also found Pope Francis has an 85 percent favorability rating among American Catholics.