When Ebola came to Liberia on March 22, it was a serious problem—not an existential threat to the entire country. Twelve people fell ill, and 11 of them died. By the end of April, the outbreak seemed to have run its course. But when the virus returned in late May, it moved more swiftly, spreading to 5 of Liberia’s 15 counties by July. By early August, a majority of the counties had been affected.

Based on figures released by Liberia’s Ministry of Health and Social Welfare, we’ve reconstructed the path of the virus in that country. The first Liberian cases were in the northern part of the country. From there, the disease spread to the south and east, and the World Health Organizations fears it could cross the border into Ivory Coast.

The colors on the GIF above show the number of new cases in each county over intervals of approximately one week. (Because the government’s reports have been issued somewhat inconsistently, some of the intervals shown are a bit longer or shorter.) You can also see how quickly the overall death toll has risen since the outbreak began. The data is imperfect, and the Liberian government has frequently revised its figures as suspected Ebola infections are ruled out. So in several instances, we’ve had to make some adjustments based on the available numbers.

As the graphic above shows, the rate of new infections being reported in Liberia appears to be falling—but disease watchers are unsure if that’s because the outbreak is slowing or because health workers have become too overwhelmed to accurately track its toll. Still, some parts of the country clearly are improving. Lofa County, in the north, where the disease reemerged in May, has seen a steady reduction in the number of new infections. Bruce Aylward, the WHO assistant director-general managing the organization’s Ebola response, said that decline indicates that in at least parts of Liberia, health workers are making real progress in their battle against the virus. 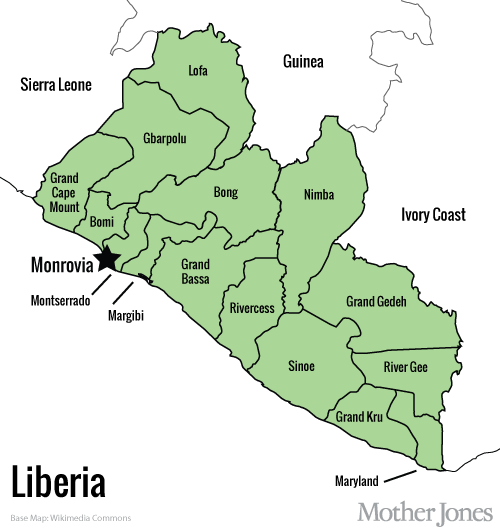