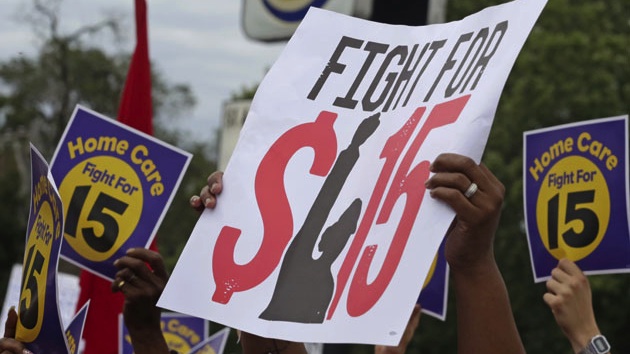 Protesters rally outside a Burger King in Chicago as part of a campaign to raise the minimum wage for fast-food workers.AP Photo/M. Spencer Green

Election Day 2014 has been disastrous for Democrats, but on one top priority—hiking the minimum wage—the party made major gains, even in red-state America. Ballot initiatives raising the minimum wage passed with broad bipartisan support in Alaska, Arkansas, Nebraska, and South Dakota, where the measure polled better than any major statewide candidate from either party.

Before Tuesday’s election, 23 states, including many Republican redoubts, had passed wage floors above the federal minimum of $7.25 an hour. In contrast, the proposed federal minimum wage of $10.10 that President Barack Obama called for in his State of the Union address earlier this year has gone nowhere. This spring, Senate Democrats introduced the Minimum Wage Fairness Act, which would have raised the wage to that level. But Republicans filibustered the bill, and the measure failed even though a majority of Senators voted for the legislation. Bob Corker (R-Tenn.) was the only Republican lawmaker willing to break with his party and support the bill.

In the run up to the election, my colleague Patrick Caldwell explained why the GOP has taken differing approaches to federal and state wage hikes:

Republicans haven’t run into much trouble opposing the minimum wage at the federal level, turning it instead into a states’ rights issue. But it’s harder for politicians to argue against state measures. During a GOP Senate primary debate in August, Republican Dan Sullivan opposed the Alaska wage measure to preserve his conservative bona fides and then dropped his opposition after gaining his party’s nomination.

Given how popular the state-level measures were, most conservatives realized that opposing them was futile. Jackson T. Stephens Jr., the chairman of the Arkansas Club for Growth, sued to block his state’s ballot initiative on technical grounds but gave up fighting after the Arkansas Supreme Court rejected his challenge. “This is an overwhelmingly popular initiative,” he told the New York Times. “This thing is going to pass whether I jump up and down or spend all my money.”