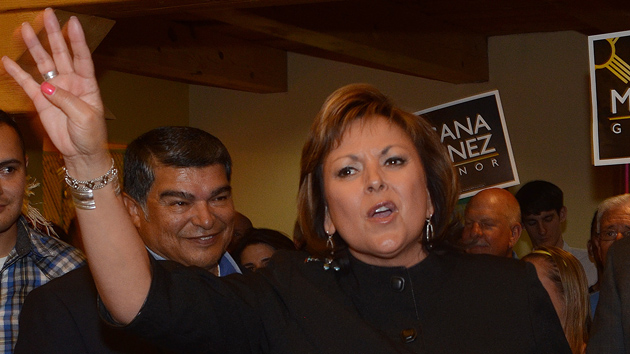 Heading into her 2014 reelection bid, New Mexico Gov. Susana Martinez was already a fixture on 2016 shortlists for vice president. No less a figure than Mitt Romney name-dropped her as presidential material. And after her easy victory over Democratic Attorney General Gary King on Tuesday, expect to hear a whole lot more about Martinez’s national potential.

The Associated Press called the race at 10:27 p.m. Eastern time, a little more than an hour after polls closed. There was never any doubt about the outcome of New Mexico’s gubernatorial race: Martinez, who is 55, never once trailed King in the polls, and she opened up a 15-point lead in the final days of the race. Central to her success was a huge money advantage. Her campaign outspent King’s almost 7-to-1 in the final stretch, $2.4 million to $363,000. In their most recent campaign finance filings, Martinez reported having $708,693 on hand to King’s $10,103.

King, the 60-year-old son of three-term New Mexico governor Bruce King, never found his footing as a candidate. In addition to failing to raise the funds needed to compete with Martinez and her allies including the Republican Governors Association, King cycled through three different campaign managers in two and a half years. One of them, Steve Verzwyvelt, resigned just days into the job after the Washington Free Beacon highlighted a series of offensive tweets he’d sent out.

Perhaps the most attention paid to the New Mexico governor’s race on the national level occurred in the wake of Mother Jones’ April cover story on Martinez. Exclusive audio recordings, private emails, and other documents painted Martinez and her aides as vindictive, petty, and nasty, and her opponents sought to use the comments against her during the campaign. The attacks, however, did little to diminish her political standing.

But Martinez, who has repeatedly ruled out a run for vice president or president, is not entirely in the clear. In describing the paranoia of her team, the Mother Jones story on Martinez included this passage:

Martinez’s crew saw enemies everywhere. A former staffer recalls the campaign on multiple occasions sending the license plate numbers of cars believed to be used by opposition trackers to an investigator in Martinez’s DA office who had access to law enforcement databases. In one instance, a campaign aide took a photo of a license plate on a car with an anti-Martinez bumper sticker and emailed it to the investigator. “Cool I will see who it belongs to!!” the investigator replied.

That reporting, as well as the work of the Santa Fe Reporter, set off a chain of events that ultimately led to the state attorney general’s office opening a criminal investigation into potential destruction of state records by a close friend of Martinez’s who succeeded her as New Mexico’s Third Judicial district attorney in 2011 and 2012. The investigation is ongoing.