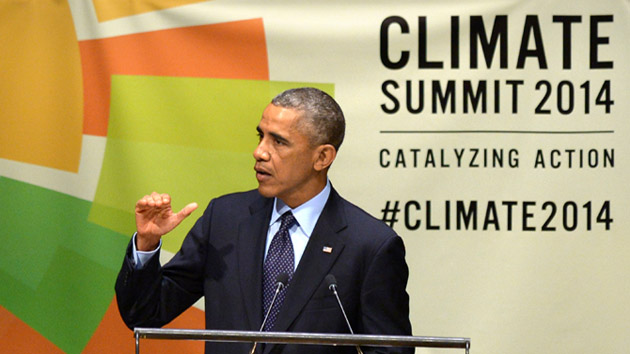 What a week! First President Barack Obama announces a massive climate agreement with China designed to lower both countries’ carbon emissions while doubling down on clean energy development. Now this morning, the New York Times is reporting that the president will soon announce a $3 billion contribution to the Green Climate Fund, a UN-administered account that will help developing countries clean their energy sectors and adapt to the impacts of global warming.

A $3 billion pledge from the United States would double the size of the fund; the biggest donations up to this point were $1 billion each from France and Germany. More countries are expected to make commitments at a UN meeting in Berlin next week. The fund’s stated goal is to reach $15 billion before a key meeting next month in Lima, Peru.

Obama’s pledge “is a strong and important signal to developing countries that the US is serious ahead of climate negotiations in 2015,” said Alex Doukas, a sustainable finance analyst at the World Resources Institute.

It is not clear whether Mr. Obama’s $3 billion pledge will come from existing sources of funding, or whether he will have to ask Congress to appropriate the money. Since 2010, the Obama administration has spent about $2.5 billion to help poor countries adapt to climate change and develop new clean sources of energy, but Republicans are certain to target additional requests for money linked to climate change and foreign aid.

So there are still some details to work out. But like the US-China climate deal, the most immediate impact of this pledge announcement will be to encourage other countries to up the ante on their own commitments.