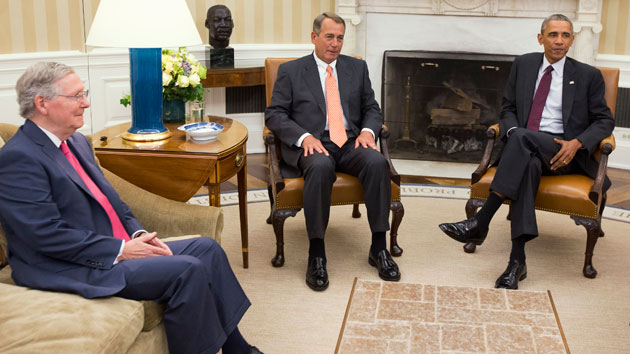 As the postelection celebration (for the GOP) and cleanup (for the White House and the Democrats) continues, some political observers of a D bent are trying to push a silver-lining idea: Now that the Republicans fully control Congress, they will have to act more responsibly and demonstrate that they can govern and not just say no to everything.

Isn’t it pretty to think so.

There is little evidence to support this lovely notion. The fundamental political dynamic of the Republican Party has not shifted; it’s advance has been fueled by its Obama-hating tea party wing. Joni Ernst of Iowa and Cory Gardner of Colorado will be two new GOP stars in the Senate, and they both hail from the far-right region of their party. Their model senator will likely be Ted Cruz of Texas, who on election night refused to endorse the newly reelected Mitch McConnell of Kentucky as Senate majority leader, signaling his intention to lead what might be called the Monkey Wrench Caucus. And in the House, the tea party club—which blocked House Speaker John Boehner’s deal-making with the White House and pushed for government shutdowns and a debt ceiling crisis—will likely have a few more members when the new Congress convenes in January. The lesson the House tea partiers will probably draw: Obstruction pays off, big-time.

Sure, Republican lawmakers will be eager to pass bills, but their efforts won’t be aimed at forging compromises with the president. Their legislation will likely target Obamacare and slash spending for social programs. They can be expected to fiercely block presidential appointments, especially judges. They might try to enact restrictions on abortion, and they will certainly seek to gut environmental regulations and climate change policies. Oh yes, and they will push tax cuts for the well-to-do. Such an agenda will be predicated on more confrontation and obstruction.

The idea that Republicans, emboldened by this election, will now negotiate more reasonably with the president seems like wishful thinking. At least one senior administration official assumes it is. When I asked him whether he was buying this happy talk, he laughed and grimaced simultaneously. “The problem hasn’t been that Boehner doesn’t want to govern,” he said. “He can’t, because of the crazies in his own party.” With these election results, the official pointed out, there will be even more “crazies” for Boehner and McConnell to contend with.

“And just wait until Cruz is chairman of some subcommittee,” he added with a sigh. A long sigh.