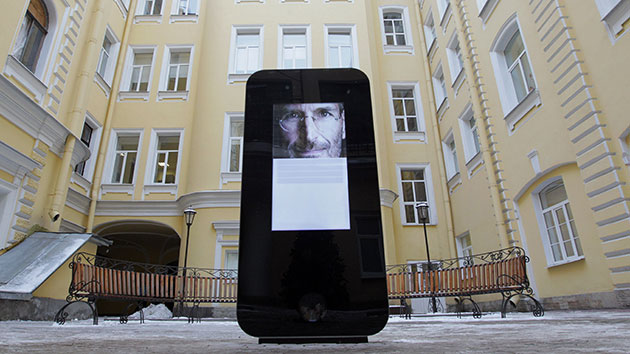 The memorial to Steve Jobs in St. Petersburg, RussiaPhotoXpress/Zumapress

Russian media is reporting that a memorial to Steve Jobs in St. Petersburg was dismantled on Friday, one day after current Apple CEO Tim Cook came out as gay.

A group of Russian companies called the Western European Fiscal Union (ZEFS) erected the more than six-foot tall monument, shaped like an iPhone and featuring an interactive screen that showed information about the Apple founder, in January of 2013, outside of an IT research university in St. Petersburg.

The ZEFS press office said the monument was taken down in order to comply with Russia’s law prohibiting “propaganda of nontraditional sexual relations to minors” a broadly-worded law passed in June 2013 that effectively criminalizes most LGBT expression.

ZEFS noted in their statement that the memorial had been “in an area of direct access for young students and scholars.”

“After Apple CEO Tim Cook publicly called for sodomy, the monument was taken down to abide by the Russian federal law protecting children from information promoting denial of traditional family values.”

Shortly after Cook wrote publicly about being gay, famously anti-gay St. Petersburg legislator Vitaly Milonov suggested that Cook be banned from Russia forever, because he might bring Ebola, AIDs, and gonorrhea into the country.

According to Russian media reports, ZEFS gave a second reason for the monument’s removal: revelations by Edward Snowden that Apple sends information about its users to America’s National Security Agency. (When these revelations first came to light, Apple denied having knowledge of the NSA’s surveillance.)

Russian media also reported that the head of ZEFS said he wouldn’t be opposed to re-installing the monument, provided that it had the capability to send a message to the US rejecting all Apple products.

So the next logical step here would be for Russia’s elite to give up their personal iPhones, right? Well, fat chance.