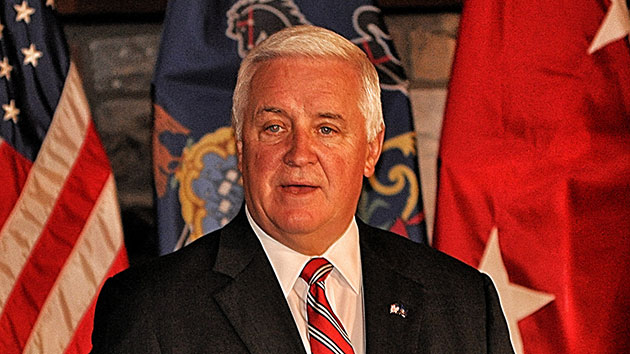 Tom Corbett, the Republican governor of Pennsylvania, was defeated in his bid for a second term Tuesday, falling to Democratic businessman Tom Wolf, who is not the dapper southern guy who wrote Bonfire of the Vanities.

One of the biggest issues in the race—and a key driver of liberal rage—was education. Corbett and the GOP-dominated Pennsylvania legislature cut a staggering $1 billion from public education after he took office in 2011. The distribution of the cuts was highly discriminatory, with poor students losing, on average, 50 percent more funding than rich kids. In part because of these cuts, the Philadelphia school district faced a $300 million shortfall in 2013. That year, and again this year, Philadelphia students were allotted zero dollars for textbooks. But pissed-off liberals fuming about education cuts weren’t the only people who hated Corbett—some Penn State fans did, too.

It seems quite plausible that some voters thought Corbett went too easy on Penn State. But there’s little hard evidence to support that he did. Corbett, who was the state’s attorney general before being elected governor, was initially accused of stalling the probe of Jerry Sandusky’s actions for political gain. But Kathleen Kane, the Democrat who succeeded Corbett as AG, investigated the matter and cleared him of that charge.

Anger still burns among some PSU alumni over Corbett’s role, as governor and a member of the school’s board of trustees, in firing legendary football coach Joe Paterno after Sandusky was arrested in November 2011.

Corbett at the time also publicly backed the NCAA sanctions imposed on the university, including limits on football scholarships and the erasure of 111 of Paterno’s 409 victories, the most ever for a coach, from the record books.

“The Kane report doesn’t cause more bleeding, but it doesn’t heal past wounds for those who are angry at him for how he treated the university in the aftermath,” said Christopher Borick, a pollster based at Muhlenberg College.

“A lot of Penn State people feel he was heavy-handed and kicked him when they were down, piling on and gloating over the Paterno decision,” Borick said.

Paterno died shortly after he was fired, leading some alumni to accuse Corbett of being “complicit” in the coach’s death, as one GOP strategist put it.

In his first run for governor during the 2010 midterms, Corbett dominated in Centre County, where Penn State is located. But as Fitzgerald notes, Republican turnout in Centre County was down dramatically during this year’s primary—with 14 percent of GOP voters writing in someone other than Corbett for governor.