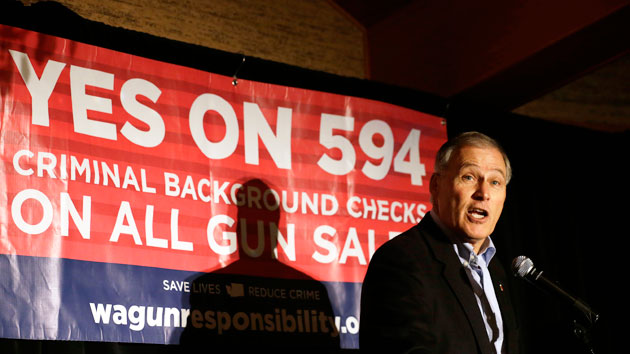 Most postelection coverage has focused on how Republicans drubbed Democrats in the battle for Congress, but there was another resounding victory on Tuesday worth noting, and it wasn’t a partisan one. Universal background checks for gun buyers became law in Washington state, the first such measure to be passed by popular vote in any state in recent memory.

And popular it was, supported by 60 percent of voters. They agreed that buying weapons at gun shows or on the internet should no longer be possible without basic regulations. “Our goal has never been about finding a single solution that will end gun violence once and for all,” said Seattle Mayor Ed Murray after Initiative 594 passed. “Instead, our goal has been to enact a sound system of commonsense rules that can, by working in concert, make an enormous difference.” Murray noted that states with expanded background checks—now 18 of them, plus Washington, DC—have fewer women killed in domestic-violence situations, fewer law enforcement officers shot, and fewer suicides with firearms. The editors of the Seattle Times said the wide margin of victory showed that “voters feel the grim, relentless toll of gun violence.”

“As the NRA will tell you, intensity trumps money much of the time. In this case they lost on both counts.”

It was fresh on their minds. Public gun rampages—which tend to draw outsized media attention—have been on the rise the last several years, with the latest taking place at a Seattle-area high school on October 24. Three victims died, two others were gravely injured, and the perpetrator shot himself to death, as so many of them do. Local polling right at that time appeared to show an increase in support (which had already been strong) for I-594. The last time a similar measure was passed by popular vote was in Colorado in 2000, in the wake of the Columbine mass shooting. (It’s worth noting that the hardcore gun lobby’s opposition in Colorado back then included the same strain of Nazi rhetoric that was trotted out in Washington state this time.)

Washington state’s vote was the clearest electoral test yet beyond Congress for the gun reform movement that rose out of the devastation at Sandy Hook Elementary School two years ago. Everytown for Gun Safety, backed by billionaire Michael Bloomberg, and Americans for Responsible Solutions, founded by former congresswoman and mass shooting survivor Gabrielle Giffords, both devoted major funds and other strategic assets to the fight. The primary stated goal of these groups is to function as a formidable counterweight to the National Rifle Association and its political influence; if the passage of I-594 (as well as the defeat of a counter initiative) is any indication, they’ve gained some serious momentum in their less than 24 months of existence. Everytown now has 2.5 million supporters, according to the organization’s former executive director Mark Glaze. “The movement now has plenty of money and plenty of talent, and that’s a big difference from just a few years ago,” Glaze told me on Wednesday. “As the NRA will tell you, intensity trumps money much of the time. In this case they lost on both counts.”

The NRA and its allies also spent millions on the fight—and feared the outcome they now face. “We are very concerned that [Bloomberg’s group] will replicate this and we will have ballot initiatives like this one across the country,” a NRA spokesperson told the Olympian just prior to the vote.

The gun lobby has long tapped allies in statehouses to block firearms regulations, but the Washington experience may have just revealed a potent threat to that modus operandi. Next up? Glaze says Nevada, Arizona, Oregon, and Maine are strong prospects. Ballot initiatives tend to be expensive (and aren’t allowed in all states), but expanded background checks look to be a solid bet, consistently drawing overwhelming support in national polls. Circumventing state legislators may not be the easiest route, notes Glaze, “but when a majority of people want something badly enough, they can still get it.”