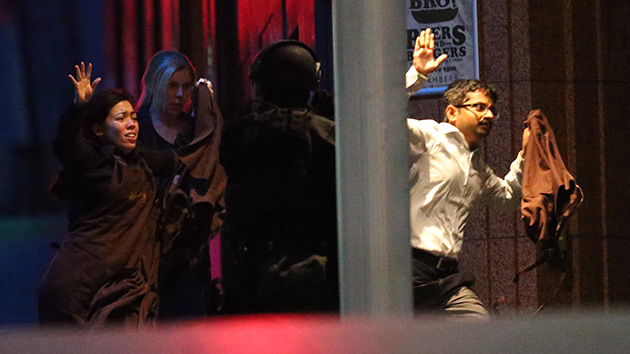 Hostages run towards armed tactical response police from a cafe under siege at Martin Place, in the central business district of Sydney. Rob Griffith/AP

This story is developing, and being updated below.

The heart of Sydney, Australia, is currently in lockdown, as a siege unfolds at a downtown cafe. Reporting is still fuzzy and ongoing, but here’s what we know so far: Police are responding to a situation at the Lindt Cafe in Martin Place, a central plaza in the city surrounded by banks and law firms, and not far from the state parliament buildings and the Sydney Opera House.

Twitter users have posted images of people, apparently hostages, with their hands against the windows of the cafe and holding up a black flag with Arabic writing on it. Guardian Australia is reporting the flag reads, “There is no god but the God, Muhammad is the messenger of God.” It is not the Islamic State flag. Large parts of the area have been cordoned off.

The Australian Broadcasting Corporation, which has unlocked its live stream for an international audience, is providing rolling coverage. Channel Seven is also providing live coverage here.

The Australian Prime Minister, Tony Abbott, has released a statement saying his government is convening an emergency session of the National Security Committee of Cabinet:

A statement from the Prime Minister on the events at Martin Place @7NewsSydney pic.twitter.com/GbBx4W1hBV

UPDATE 1: Sunday, December 14, 2014, 9 p.m. EST: The Australian Prime Minister Tony Abbott has addressed reporters in Australia’s capital, Canberra. He didn’t provide any further factual detail about the unfolding saga in Sydney. Notably, he did not outline potential reasons for the attack. “We don’t yet know the motivation of the perpetrator,” he said, though he added that “obviously there are some indications” the attack could be political in nature. Abbott said the normal business of government would continue:

I can understand the concerns and anxieties of the Australian people at a time like this, but our thoughts and prayers must above all go out to the individuals who are caught up in this. I can think of almost nothing more distressing, more terrifying than to be caught up in such a situation and our hearts go out to these people.

UPDATE 2: Monday, December 15, 2014, 12:15 a.m. EST: It appears that at least three hostages have gotten free, though whether they escaped or were released is not yet clear.

UPDATE 5: Monday, December 15, 2014, 10:30 a.m. EST: Police have stormed the Sydney cafe where hostages have been held for the last 16 hours, according to live television footage from the scene. Several hostages could be seen fleeing into Martin Place in the early hours of Tuesday morning, local time, from inside the building, one with his hands raised; the raid was accompanied by loud bangs and bright flashes in a dramatic flurry of activity. Within minutes, paramedics were on scene. Guardian Australia is reporting that live ammunition was used in the raid. Images show a bomb disposal robot also present, with police officers attending in heavy protective gear. Reporter Helen Davidson has told Guardian Australia “At least four people have been wheeled out on trolleys.”

UPDATE 6: Monday, December 15, 2014, 11 a.m. EST: New South Wales Police have confirmed to the Australian Broadcasting Corporation that the siege which sent downtown Sydney into lockdown for the majority of Monday, local time, has come to an end. The fate of the assailant, and his remaining hostages—if any—remains unclear.

UPDATE 7: Monday, December 15, 2014, 1 p.m. EST: NSW Police have confirmed the death of Man Haron Monis, the man they say is responsible for taking an unconfirmed number of hostages in Sydney, according to the ABC:

UPDATE 8: Monday, December 15, 2014, 1:30 p.m. EST: NSW Police have confirmed the death of three people, including the assailant, during police operations earlier today. Police say a man, aged 34, and a woman, aged 38, were both taken to hospital and were later pronounced dead; the names of the victims have not been released; there is no further information about the total number of hostages originally taken. Police also announced four others were injured in the news release below:

UPDATE 9: Monday, December 15, 2014, 2:00 p.m. EST: NSW police commissioner Andrew Scipione has now confirmed there were 17 hostages, and that the siege was the work of a “lone gunman.” He said that the police raid of the cafe in the early hours of Monday, local time, was the result of police hearing gunshots from inside the building. A police officer has also been wounded as a result of a gun injury to the face.