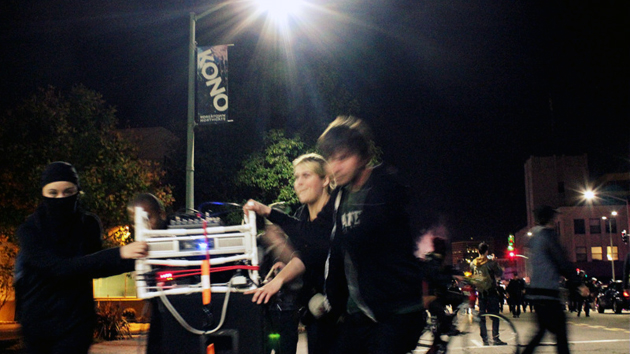 Police move in as marchers push a cart of sound equipment in Oakland, CAGabrielle Canon

The sun was setting as the Millions March began to disperse in downtown Oakland, California. Thousands of people had taken to the streets throughout the day to show solidarity and outrage over the slew of high-profile killings of unarmed African Americans by police. With coordinated marches held around the country, it had been a day of signs and banners, impassioned speeches, and pointed but peaceful demonstrations.

As evening fell, a second march was about to begin. A young man in a black hoodie, his face hidden behind a red bandana, shouted “Fuck the police!” through a megaphone as hundreds filed into the intersection behind him—the tone of this march was markedly darker.

“It’s hard to describe,” Brian said. “You go on a march without music—there’s a difference.”

In Oakland, anger over racism in the criminal justice system is always simmering beneath the surface. But the grand jury decisions to not indict the officers responsible for the deaths of Mike Brown in Ferguson, Missouri, and Eric Garner in Staten Island, New York, had fueled continuing protests around the Bay Area. Graffiti scrawled across street signs and boarded-up businesses reflected the shouted sentiments that could be heard over sirens and helicopters, echoing through the streets each night.

But something made this march stand apart. Among the marchers was a cart stacked with two PA speakers, an amplifier, an inverter, and a couple of deep-cycle batteries to power the setup. With nearly $4,000 worth of equipment, the music cart added a dimension missing from the previous protests. At dusk, people followed the sound to join the march, pausing to circle around the cart and dance to the rhythm booming through the speakers.

Brian, the cart’s owner, who asked that I not publish his last name, told me he started bringing his sound system to demonstrations as part of Occupy Oakland back in 2011*. A student who works part time in sound production and theater design, Brian was happy to step up when march organizers asked him to. “I think music helps crowds stay together and it helps people feel more empowered. It’s hard to describe,” he said, with a pause. “You go on a march without music—there’s a difference.”

“I think it is super-important, as a white person in this movement, that I take a backseat.”

Brian’s selections, some of which were penned on these very streets, reflected the sentiments of the marchers. “I think in a lot of ways music enables protests to be something that is fun and joyous while still matching the angry mood,” he told me. “That is balance that you have to strike.” He emphasized that his role was strictly one of support. “I think it is super-important, as a white person in this movement, that I take a backseat. I am trying to be very careful not to lead the march with the sound system, and it is very important to play music that people are enjoying in the crowd.”

Police presence was felt throughout the night, but around 6:30 pm, following scattered acts of vandalism, an Oakland Police intercom boomed instructions to disperse, warning the hundreds of marchers that their assembly was unlawful. Anyone there, regardless of purpose, was subject to arrest, which could “result in personal injury,” the police warned. The march continued even after police ran at the crowd, causing some protesters to scatter momentarily. But the music kept playing and people kept marching.

Some volunteered to help push the cumbersome equipment—nearly 200 pounds of it—over grassy knolls, through stopped traffic, and away from police who attempted to corral protesters into kettles, a common crowd-control tactic. Others gave Brian song requests.

He tried his best to match their moods, switching from heavier, more strident songs to upbeat classics like the Commodores’ “Brick House” and Michael Jackson hits to calm the crowd during police confrontations. “At that point we had broken out of those kettles,” he said, “and it is a little bit of a scary moment—a moment in which we won, which is great, but I think people were a little on edge.” The music seemed to do the trick; marchers could be seen dancing past a growing number police vans and squad cars.

The victory wouldn’t last long, though. Around eight o’clock, the group around the sound system danced right into a police kettle and was quickly surrounded. The police silenced and confiscated Brian’s gear and began arresting people. Officers from 11 different agencies made 45 arrests that night in Oakland, and Brian was among them. He was released quickly though, and he says people can expect to see him and his sound system out on the streets again soon.

Here’s a sampling of songs he played last week:

“Rock With You” – Michael Jackson:

Correction: The original version of this article misidentified the year the Occupy Oakland protests began.