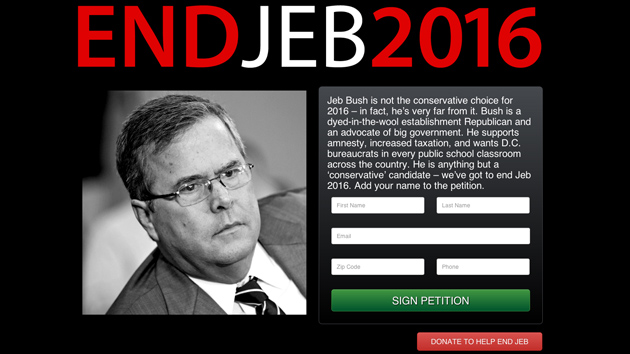 The 2016 Iowa caucuses remain more than a year distant, but conservatives are already using former Republican Florida Gov. Jeb Bush‘s potential presidential candidacy to raise cash—not to support a Bush bid, but to thwart one. Over the weekend, an outfit called the Constitutional Rights PAC blasted out an email promoting the website EndJeb2016.com and soliciting donations. Federal filings show that the PAC is connected to a Beltway lawyer who led one of the most significant money-in-politics Supreme Court cases of the past five years, and to a media firm that’s helped to stoke the Benghazi scandal, the Obamacare repeal campaign, and an effort to rename Washington, DC’s football team the “Washington Tea Party.”

The recent EndJeb2016.com email excoriated Bush, the eldest son of George H.W. Bush and brother of George W. Bush, as “a died-in-the-wool establishment Republican and an advocate of big government.” The email asked supporters to sign an online petition calling Bush “anything but a ‘conservative'” and to give between $25 and $5,000 to the PAC. Larry Ward, the PAC’s founder who signed the End Jeb 2016 email solicitation and registered the EndJeb2016.com site, says the group will distribute its petition to members of Congress, the Republican National Committee, and news outlets once it hits 10,000 signatures. (The initial End Jeb blast brought in about 1,500, he says.)

But it’s hard to see how the Constitutional Rights PAC, started in 2013, will put even a dent in Bush’s 2016 plans. The PAC’s federal filings show that it has spent the small sum of money it’s raised primarily on consultants, fundraising, and legal fees. In 2013 and 2014, it pulled in $36,282 from small donors and other PACs and devoted most of that haul to paying for direct mail and online fundraising and digital consulting. In other words, the group raised money to be spent on running its website, generating petitions, and—you guessed it—raising more money and gathering up more email addresses.

Ward is more than just the founder of Constitutional Rights PAC; he’s also the president of Political Media Inc., a consulting firm that Constitutional Rights PAC paid more than $10,000 in 2013 and ’14. Ward’s firm, according to federal records, has also banked $195,000 raised by a PAC called Special Operations Speaks, which aims to rev up conservative donors about the Benghazi controversy. Asked about what Constitutional Rights PAC had in store for Bush, Ward said its work is “mostly digital advocacy” and that “we intend to do whatever we can (limited budget) to discourage Jeb from running.” He adds that it is “not close to being true” that the End Jeb effort exists to primarily gin up dollars, and that “I started the PAC to run projects I was passionate about.” As evidence of his firm’s impact, Ward points to his work on Gun Appreciation Day, back in January 2013, which, he says, “defeated (yes we are taking credit) gun control legislation.”

Meanwhile, the PAC’s lawyer is Dan Backer, a brash right-leaning attorney who helped bring the Supreme Court case McCutcheon vs. Federal Election Commission. Alabama businessman Shaun McCutcheon, a Backer client, had challenged the federal limit on the number of candidates a donor could contribute to during a two-year election cycle. Last April, the Supreme Court sided with Backer and McCutcheon, striking down the so-called aggregate limits on federal-level campaign donations. As a result, donors can in theory now give as much as $3.5 million in a single election cycle by spreading their money around to candidates, political parties, and PACs. Backer tweeted his response to the decision: “FREEEEDOMMMMM!!!!” (When it comes to Constitutional Rights PAC, Backer says his firm provides legal services but isn’t involved in the PAC’s day-to-day activities.)

Federal records show that Backer and his firm are also working on another opposition effort targeting a likely 2016 candidate: Hillary Clinton. Stop Hillary PAC, which has mined conservative email lists for donations and addresses, paid Backer’s firm, DB Capitol Strategies, tens of thousands of dollars for legal work in the last two years.

There are no signs that End Jeb 2016 has a serious plan to curb Bush’s campaign or that Bush needs to fret about it. Bush has bigger problems now that Mitt Romney, whose donor base and adviser set overlap with Bush’s, is eyeing a third presidential bid. But that’s not going to stop a crew of consultants from fundraising off of conservative unease about Bush.