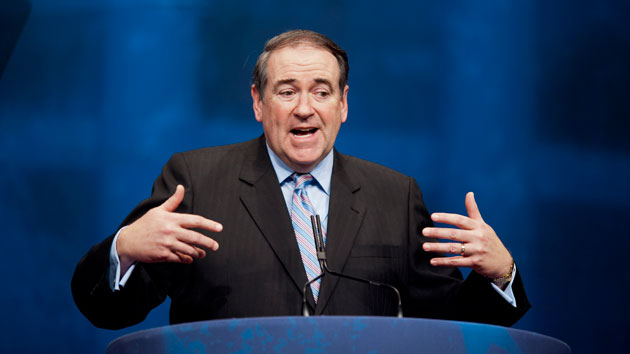 Politics is a family business for potential Republican presidential candidate and former Arkansas governor Mike Huckabee. Over the last six years, the Fox News host’s political action committee, which was created to raise money for GOP candidates, has paid nearly $400,000 to members of Huckabee’s extended family, while spending just a fraction of its multimillion-dollar fundraising haul on the Republican contenders.

Huck PAC, which Huckabee launched in 2008 after dropping out of the Republican presidential race, “is committed to electing conservatives across the nation at all levels of government,” according to a statement on its website. But according to review of Federal Election Commission records, a significant portion of the money the PAC has collected has gone into the salaries of family members or the coffers of direct-mail fundraising firms.

Katherine Harris, Huckabee’s niece, was paid $165,042 between 2008 and 2013 (plus benefits), first as a staffer for the PAC and then as a contract worker. Sarah Huckabee, his daughter, received $104,308 between 2008 and 2010 as the PAC’s executive director. And Huckabee’s daughter-in-law, Lauren Huckabee, who Politico reported in 2012 manages her father-in-law’s schedule, donor relations, and endorsements, has been paid $111,274 for her work at Huck PAC. The ex-governor’s short-lived non-profit, America Takes Action, Inc. previously paid her $60,548.

Putting family members on the payroll is an old political pastime. A 2013 report from USA Today found 32 members of Congress had paid relatives out of their campaign funds over a two-year period, doling out more than $2 million in political cash. Former Virginia Sen. Jim Webb, who is considering a bid for the Democratic nomination, came under fire last month after Business Insider reported his PAC, Born Fighting, had paid his daughter nearly $100,000.

Responding to questions about PAC expenditures to Huckabee relatives, Huck PAC executive director Chad Gallagher said in a statement, “The family who worked on Governor Huckabee’s presidential campaign in 2008 helped get the PAC started and no family members have been on the PAC’s payroll in over two years.”

Republican candidates haven’t benefited as much from the political action committee as Huckabee’s relatives. Since its inception, Huck PAC has never spent more than 12 percent of its funds on candidates or other PACs. It gave only 5 percent of its revenues—that is $47,000 of $1,063,142—to candidates during the 2012 cycle, when Huckabee briefly flirted with a second presidential run. Meanwhile, the PAC’s budget has increasingly flowed to firms that specialize in direct-mail fundraising, a notoriously inefficient process that can cost a PAC almost as much money as it yields. So to a certain degree Huck PAC donors are not underwriting Huckabee’s favorite conservative causes; they’re financing more fundraising.

As a first-time presidential candidate in 2008, Huckabee projected an image of a thrifty up-and-comer, cutting costs at every opportunity and staying at the cheapest motels. Before he dropped out of the race, he even left the campaign trail to give a paid speech in the Cayman Islands because, he said, “you’ve got to work for a living and pay your bills.”

Since then, he’s made a bundle as a Fox News host, book author, and commentator, and he’s also cashed in on his status as a social conservative favorite much in demand at GOP events. Last July, Politico reported on Huckabee’s penchant for charging state Republican parties for expensive, chartered flights—$15,944 for one trip to Iowa—when traveling for meetings and fundraisers. In 2009, an Alabama congressional candidate was forced to take out a loan after Huckabee’s $33,990 speaking fee ended up costing more than the candidate had raised at the fundraiser.

Whoever wins the Republican nomination next year will have to spend hundreds of millions of dollars to get to the White House. If Huckabee wants to win the hearts and minds of his party’s donors and activists, he may have to prove he’s learned not just how to raise money—but how to spend it.