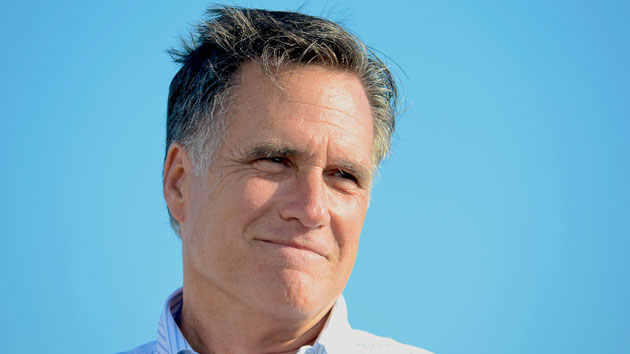 It is time for liberals to cheer Mitt Romney.

Not because his possible entry into the 2016 Republican presidential contest could cause chaos for the GOP. But because Romney, apparently seeing the error of his “severely conservative” ways, has become a progressive crusader. Initial news reports noted that Romney was telling Republicans privately that should he mount a third presidential bid he would run to the right of former Florida Gov. Jeb Bush, an all-but-announced contender. Yet in public remarks, Romney has been sounding like a born-again lefty. At an investment management conference in Utah this week, Romney told the crowd that a new-and-improved candidate Romney would focus on climate change, poverty, and education.

Yes, climate change, poverty, and education. In a bizarre Freaky Friday sort of way, Romney appears to have been body-snatched—perhaps by the ghost of Ted Kennedy. He declared, “I’m one of those Republicans who thinks we are getting warmer and that we contribute to that,” he said of climate change. And he called for global agreements to curb greenhouse gas emissions, slamming the US government for having failed to achieve such accords. “Let’s deal with poverty,” he also proclaimed. “Have we done it? No. Let’s do it.” And to improve education, he urged more pay for teachers.

Romney, who has long had to contend with the charge that he is a serial flip-flopper, has gone far beyond the usual politically convenient change of course. It’s almost as if he has converted to Islam. What’s next? Supporting gay rights, gun control, and abortion rights? (Or, in his case, going back to supporting gay rights, gun control, and abortion rights.) In any event, this latest Mittamorphosis is a stunner, for three years ago, when he had the chance as a presidential nominee to call for climate change action and measures that directly help the poor, Romney chose not to. In fact, he did the opposite. Let’s review his short strange trip.

Climate change: In his 2010 book, No Apology: The Case for American Greatness, Romney (or a Romney aide) wrote, “I believe that climate change is occurring—the reduction in the size of global ice caps is hard to ignore. I also believe that human activity is a contributing factor. I am uncertain how much of the warming, however, is attributable to factors out of our control.” And as a candidate in 2011, he said, “I think it’s important for us to reduce our emissions of pollutants and greenhouse gases that may well be significant contributors to the climate change and the global warming that you’re seeing.” But later in the campaign, as he was closer to snagging the nomination in a archly conservative field, Romney shifted his stance and remarked, “My view is that we don’t know what’s causing climate change on this planet. And the idea of spending trillions and trillions of dollars to try to reduce CO2 emissions is not the right course for us. My view with regards to energy policy is pretty straightforward. I want us to become energy secure and independent of the oil cartels. And that means let’s aggressively develop our oil, our gas, our coal, our nuclear power.” That is, Romney got in line with the prevailing Republican rhetoric: Can’t say for sure climate change is human-induced, and we ain’t gonna do anything about it.

At the GOP convention, Romney went further in dismissing the need for climate change action. During his acceptance speech—the most important address of his political life—Romney poked fun at President Barack Obama’s promise “to slow the rise of the oceans and to heal the planet.” He smiled as Republican delegates laughed at Obama’s vow. He said not a word about the reality of climate change—or the necessity to take action on this front. The whole subject was just a punch line.

Now Romney the Climate Change Champion blasts Obama for not doing enough. He seems to have missed the agreement Obama recently forged with China. And at that conference in Utah, he neglected to mention the Obama administration’s efforts to restrict carbon dioxide emissions by regulating power plants and boosting fuel efficiency standards for cars and trucks. But let’s cut the Republican Al Gore some slack. Maybe he’s been too busy catching up on years of climate change science to read the newspapers. Perhaps his wifi has not been working.

Poverty: In one of the more noteworthy interviews of the 2012 campaign, Romney declared, “I’m not concerned about the very poor.” Critics immediately pummeled him for a comment that seemed quite 1 percenty. It’s not that half-a-billionaire Romney was writing off the poor—he would do that in his private 47 percent remarks—he was only noting that he believed that low-income Americans had a decent safety net that didn’t require much, if any, improvement. In other words, let them eat the bread they already have. But this surely was a signal that Romney wasn’t going to zero in on policies that explicitly and directly aid the poor. During the campaign, he was also a supporter of the budget plan proposed by Rep. Paul Ryan (R-Wis.), then the chair of the House Budget Committee who would become Romney’s running mate. Almost two-thirds of the $5.3 trillion in Ryan’s proposed spending cuts came from programs that assist people of limited means. In his acceptance speech, Romney did devote four sentences to poverty in America, but as a remedy he merely touted his overall economic plan of lower taxes and less regulation. Combating poverty was not promoted as a top item on his to-do list.

Education: In his acceptance speech, Romney only referred to school choice as the means to improve education. He uttered not a word about raising the pay of teachers. Clint Eastwood also said nothing about this. (On his campaign web site, Romney did say he would give better teachers better pay.)

So what gives? Romney was once a moderate Republican governor who held liberal positions on certain issues—and who pioneered Obamacare before Obamacare was cool. But as he was sucked into the black hole of GOP presidential politics, these views were crushed into nothingness by forces as inexorable as gravity. Yet like Matthew McConaughey’s character in Interstellar, Romney has come back from beyond the event horizon. It’s a miracle. Hallelujah. He’s now ready to heal the climate, assuage poverty, and prioritize more pay for teachers. The few dozen liberal Republicans who still exist should be rather excited.

Given that Romney is not likely to be warmly embraced by the tea party GOP base for his new priorities, progressives ought to welcome him enthusiastically. No doubt, Mitt 3.0, if he gets back into the fray, will courageously defy all those Republican climate change deniers who chair congressional committees with responsibility for climate change action. The long list includes Sens. Ted Cruz, James Inhofe, and Lisa Murkowski. (“For Pete’s sake, climate change is real, and, jimminy, we got to do something.”) And should Ryan, who now helms the House Ways and Means Committee, once again try to slash programs for the poor, Romney certainly will lead Code Pinkish direct action against his 2012 partner. Isn’t it easy to imagine Romney saying, “Not one more tax cut for me and Ann, if it means an American—or, more accurately, 3,763 Americans—have to go without food stamps for their families”?

Liberals across the land ought not scoff at the remodeled Romney. They should encourage him to return to the political battlefield. For the sake of the planet and down-and-out Americans, there needs to be more reasonable (if lonely) Republicans within the GOP. And if nothing else, this new Mitt proves that evolution is real.