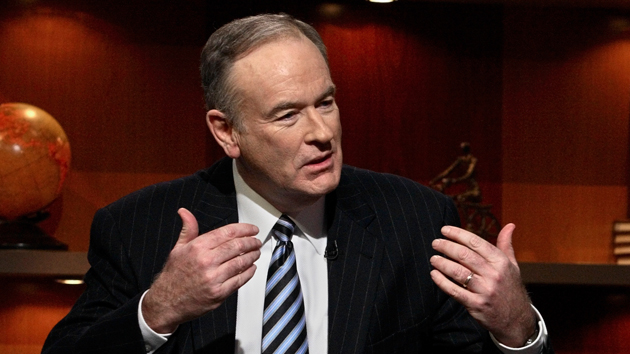 Last week, after Mother Jones published an article by Daniel Schulman and me reporting on Bill O’Reilly’s mischaracterizations of his wartime reporting experience, the Fox News host replied with insult, denial, threatening rhetoric, and bombast.

Insult: He called me a “liar,” a “despicable guttersnipe,” and “garbage.”

Denial: Though the story included video of O’Reilly stating he had been “in a war zone in Argentina, in the Falklands,” O’Reilly insisted, “I never said I was on the [Falklands] island, ever.”

Threatening rhetoric: In one of his many comments to other reporters (while continuing to ignore the questions we sent him before publication), O’Reilly declared that I deserve “to be in the kill zone.”

Bombast: O’Reilly proclaimed, “Everything I said about my reportorial career—EVERYTHING—is accurate.”

And that was just in the first 24 hours. Eventually, O’Reilly added another element to his arsenal: proofiness.

After nearly a day of hurling invective, O’Reilly opened his cable show Friday night with a monologue that assailed me as a smear-meister. But he also tried to win the day by producing documents that, he asserted, showed how he had been unfairly tarred. “In what I consider to be a miracle,” he declared, “I found this CBS internal memo from 33 years ago praising my coverage” of a protest in Buenos Aires that happened just as the 1982 Falklands war ended.

Our article had pointed out that O’Reilly’s later accounts of this protest—which he called a “combat situation”—contained significant contradictions with the factual record. He has claimed that soldiers fired into the crowd, that “many” people were killed, and that “I was out there pretty much by myself because the other CBS correspondents were hiding in the hotel.” (The Mother Jones article said nothing about how O’Reilly covered the protest at the time.)

Yet O’Reilly’s dramatic account is disputed by media reports of the time and by other journalists who were there—including, CNN reported Sunday, seven CBS staffers who were in Buenos Aires at the time. (Former CBS News veteran Eric Engberg posted a particularly scathing recollection of O’Reilly’s short stint in Buenos Aires as a CBS News correspondent.)

So what did the “miracle” memo say? It apparently was from the CBS news desk in New York City, and the note expressed “thanks for a fine piece.” It showed, in other words, that O’Reilly covered the protest—which no one disputed—and it addressed none of the issues in question.

But wait, O’Reilly found another document in his basement—a letter he sent to a CBS News executive: “The crews were great…The riot had been very bad, we were gassed, shot at, and I had the best vantage point in which to report the story.” Again, the document showed what no one had disputed—that the protest turned ugly, and that police used rubber bullets and tear gas to disperse the crowd—but it provided no information backing up O’Reilly’s claim that soldiers gunned down civilians and “many” were killed.

“We have rock solid proof that David Corn smeared me,” O’Reilly concluded. Not really.

On Sunday, O’Reilly, speaking by phone, was a guest on Fox News’ MediaBuzz, which is hosted by the network’s in-house media reporter, Howard Kurtz, and he brandished a new piece of proof: a New York Times article. The story, by Richard Meislin, chronicled the protest, and O’Reilly read several paragraphs that described the violence in Buenos Aires. We cited this article in our story, and it does not say anything about soldiers shooting into the crowd, or anyone being killed. Its only reference to police or military violence is this one line: “One policeman pulled a pistol, firing five shots over the heads of fleeing demonstrators.” Nothing in the story matches O’Reilly’s description of soldiers mowing down protesters. (The Times dispatch did say, “Local news agencies said three buses had been set ablaze by demonstrators and another one fired upon.” It did not attribute those shots to soldiers or police, and the sentence suggests this violence was committed by protesters.)

But here’s the tell: As O’Reilly read from the Times story, when he reached the line about a cop “firing five shots,” he omitted the rest of the sentence: “over the heads of the fleeing demonstrators.” He jumped straight to the next sentence, hoodwinking the audience, for with this selective quotation, he had conveyed the impression that at least one cop had been firing on the protesters. He had adulterated his supposed proof.

Later in the show, Kurtz gently asked O’Reilly, “You’ve have said you covered a combat situation in Argentina during the Falklands War, you said the war zones of the Falkland conflict in Argentina. Looking back, do you wish you had worded it differently?” O’Reilly replied:

No. When you have soldiers, and military police, firing into the crowd, as the New York Times reports, and you have people injured and hurt and you’re in the middle of that, that’s the definition, all right.

Only that is not what the New York Times reported. O’Reilly was citing an article that disproved his point to prove his point.

And the reporter of that Times story, Richard Meislin, weighed in after the show to say O’Reilly had misled the audience about this article. On Facebook, Meislin wrote:

When he read it on Howard Kurtz’s Media Buzz show, O’Reilly left out that the shots were “over the heads of fleeing demonstrators.” As far as I know, no demonstrators were shot or killed by police in Buenos Aires that night.

What I saw on the streets that night was a demonstration—passionate, chaotic and memorable—but it would be hard to confuse it with being in a war zone.

There may be more proofiness to come. During Kurtz’s show, O’Reilly announced that on his Monday night show he expected to air the footage that he and his crew gathered during the Buenos Aires protest. If he does, there’s no doubt the video will present a protest that turned ugly. (Our article included video from the CBS News report on the protest—which did feature some of the footage that O’Reilly and his camera crew obtained—and that entire segment showed no troops or police firing on the protesters and slaughtering Argentines.) But unless the video O’Reilly presents on his program shows soldiers shooting into the crowd and massacring civilians, it will not likely bolster O’Reilly’s case.

That doesn’t mean he won’t cite it as proof he’s been wronged. That’s how proofiness works. The assertion is more important than the evidence itself.