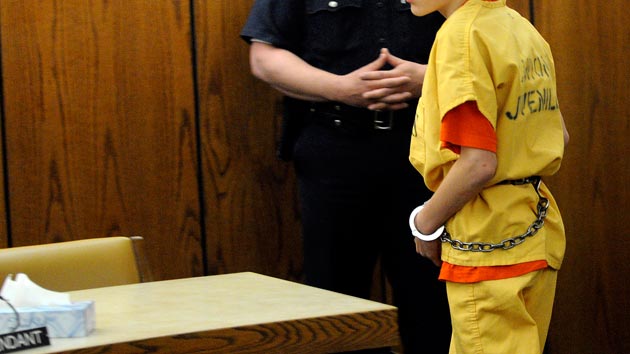 The nine-year-old stole a 14-stick pack of Trident “Layers” chewing gum, Orchard Peach and Ripe Mango flavor, worth $1.48. He’d lingered by the beverage isle of the Super 1 Foods in Post Falls, Idaho, for a while before bailing out the front door. The theft led to a missed court appearance, which led to an arrest and a night spent in a juvenile jail. The next day, the third-grader appeared in court, chained and shackled.

At least 100,000 children are shackled in the US every year, according to estimates by David Shapiro, a campaign manager at the Campaign Against Indiscriminate Juvenile Shackling. (Formal data on numbers of shackled kids does not exist.) As juvenile justice practices have grown more punitive over the past several decades, shackling has become far more common. This month, the American Bar Association (ABA) passed a resolution calling for an end to this practice because it is harmful to juveniles, largely unnecessary for courtroom safety—and contradicts existing law. “We’re not just talking handcuffs here. These kids are virtually hog-tied,” says John D. Elliott, a South Carolina defense attorney who worked on the resolution. “The only difference is their hands are in front.”

The restraints—which include handcuffs, belly chains, and leg irons—are used on kids of all ages and often don’t fit the severity of their crime: The majority of kids are in court for non-violent offenses, like shoplifting or truancy.

The ABA says that this practice is contrary to law because it undermines the accused’s right to be presumed innocent. In adult criminal court, if the defendant is seen by the jury in any sort of restraint, that’s almost always considered a mistrial, explains Judge Jay Blitzman from Massachusetts, who worked on the ABA’s resolution and helped pass anti-shackling policy for juveniles in his state. “You’re sending a message, and it’s not subliminal. It’s: ‘This guy is dangerous.'” The ABA argues that these anti-shackling principles observed in adult court should apply with equal, if not greater, force for children.

There’s plenty of behavioral science establishing that harsh treatment of young offenders is counterproductive. Even one day of unnecessary detention can have profoundly negative impacts on children’s mental and physical health. And shackling, the ABA argues, goes against the therapeutic goals of the juvenile justice system because it humiliates kids: Child psychologists have testified that publicly shackling children can be so damaging to their developing personal identity that it can lead to further criminal behavior in the future.

Indeed, the mother of the nine-year-old alluded to this in an interview with Idaho’s Coeur d’Alene Press: “He feels already like he’s the outcast of the family, like he’s not as good as everybody else,” she said, adding that he fears becoming like his father, who has served time in jail.

The rise in juvenile shackling began in the 1980s, when states started passing tough-on-crime laws in response to a perceived rise in youth crime. Influential criminologists predicted a coming wave of “superpredator” juvenile criminals, including “elementary school youngsters who pack guns instead of lunches.” The prediction didn’t come true, but it spurred a rush towards harsher punishment for kids, including life without parole, mandatory minimums, and automatic transfer to adult court for certain offenses. This hardened approach extended to courthouse security after multiple fatal shootings in courts across the country, most notably a 2005 incident in an Atlanta courthouse that left two people dead. As Elliott puts it, the courts became “virtually unyielding” after that.

Massachusetts implemented an anti-shackling rule in 2010 and since then “there really have never been issues with its implementation.”

To this day, many judges, prosecutors, and law enforcement officers argue that juvenile shackling preserves courtroom safety and order. But there’s little evidence to support that claim, argues the ABA, especially given that several states have curtailed the practice with little to no ill effects. Since Florida’s Miami-Dade County outlawed shackling kids in 2006, not one of the more than 20,000 children who have appeared in court unbound has escaped or harmed anyone, according to 2011 data. Florida eliminated indiscriminate shackling statewide in 2009, and in the two years following the ruling, officials reported only one disruptive incident. Massachusetts implemented an anti-shackling rule in 2010 and since then “there really have never been issues with its implementation,” says Blitzman.

Several states are currently considering legislation or court orders to limit the use of shackling, including Nebraska, Indiana, Connecticut, Minnesota, Utah, and Tennessee.

Colorado is also debating an anti-shackling bill. Ann Roan, the state training director for the Colorado Office of the State Public Defender, says she is optimistic that it will pass during this year’s legislative session. She explains why: “It’s just hard to come up with any research at all that says shackling doesn’t harm children.”