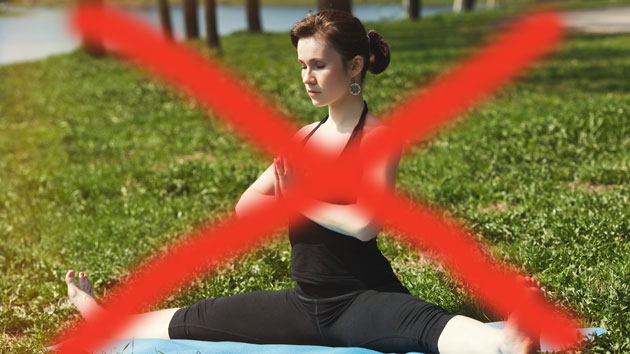 Montana Republican state Rep. David Moore has a plan to guide America out of the darkness—ban yoga pants.

Moore, who is upset that group of naked bicyclists pedaled through Missoula last year, decided that what his state really needs right now is tighter regulations on trousers. His proposed bill, HB 365, would outlaw not just nudity, but also “any device, costume, or covering that gives the appearance of or simulates the genitals, pubic hair, anus region, or pubic hair region.” Per the Billings Gazette:

The Republican from Missoula said tight-fitting beige clothing could be considered indecent exposure under his proposal.

“Yoga pants should be illegal in public anyway,” Moore said after the hearing.

Moore said he wouldn’t have a problem with people being arrested for wearing provocative clothing but that he’d trust law enforcement officials to use their discretion. He couldn’t be sure whether police would act on that provision or if Montana residents would challenge it.

“I don’t have a crystal ball,” Moore said.

Merlin’s pants! According to the Great Falls Tribune, Moore elaborated that he also believes Speedos should be illegal.

HB 365 continues a miraculous stretch for the Montana legislature. Just last December the Republican-controlled legislature issued new dress-code guidelines for the state capitol, advising women that they should “should be sensitive to skirt lengths and necklines.”

Update: Moore’s bill has been tabled.