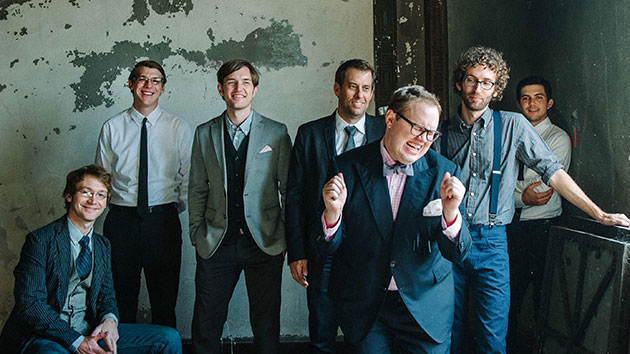 Remember your high school prom? Now imagine, for the slow dance, the class nerd—pale, big glasses, a little chubby—walked on stage and belted out the most exquisite Otis Redding cover you’d ever heard. That’s what came to mind when I saw Paul Janeway, the lead singer of St. Paul & the Broken Bones, perform at the Fillmore in San Francisco over Valentine’s Day weekend. Featuring Janeway’s wrenching vocals plus sizzling guitar, horns, and rhythm, the tight and explosive seven-piece Broken Bones banded together in Birmingham, Alabama, and released their first EP in 2012. They’ve since appeared on Letterman and at Bonnaroo, and released a full album, Half the City, produced by the keyboardist from the Alabama Shakes.

Decked out in a crisp navy suit, a red satin pocket square, and flashy gold shoes, Janeway charged through Redding numbers during his Fillmore set, as well as a dance-worthy cover of Radiohead’s “Fake Plastic Trees” and a killer version of Paul McCartney and Wings’ “Let Me Roll It.” The Broken Bones’ gospel-infused originals kept the audience swaying through the show, and delivered proof that classic soul lives on through more than just covers.

I spoke with Janeway the morning after his latest San Francisco show.

Mother Jones: You’ve said: “My goal in life until I was about 18 years old was to be a preacher.” What was your first reaction to learning that your song would be in Fifty Shades of Grey?

Paul Janeway: [Laughs.] All right, my first Fifty Shades of Grey question! When they presented the licensing opportunity, they presented it as: It’s going to be a huge movie, they want to put a decent amount of the song in the movie in a nonsexual scene.

I knew it was a book, but I had no idea what it was. So I was like, sure, big movie, good exposure. I’ll be in this romantic comedy. Which is what I thought it was: a romantic comedy. It’s a good way to make money in the music business, you know. Then I saw a preview for it, and I was like, “Oh, shit. Oh, no. What have I done?”

To me it’s kind of funny. I’m glad it’s in a nonsexual scene to be honest with you, not for my sake but for my family’s sake. I don’t have any moral things about it. It’s not like we’re in the movie—it’s just a song for a minute.

MJ: My friend had heard some of your songs but didn’t know much about you. When we first walked in show, his first words were: “Wow, it’s just a bunch of white dudes.” Do you get that a lot?

PJ: Yeah, a little bit. It is interesting that people get kind of shocked by that, I guess. I don’t ever really think about that because it’s just music that we love. We’re from Alabama, and if you look at the Muscle Shoals Swampers, that was just a bunch of white dudes. They wrote some of the best soul music ever written. I think if people don’t know the musical history, I think they’re like, “Oh?!”

MJ: I didn’t realize you were so theatrical: You were humping the speakers at one point, throwing down the mic. Did that dramatic side start before you became a singer, or has music brought it out of you?

PJ: That’s always been something I’ve been attracted to. I love Broadway musicals. Really for me, as St. Paul, it’s an exaggeration of my personality put on to the max. It’s just ridiculous. I don’t typically climb on speakers in real life. It’s an adventure within the show—like, okay, here’s something to climb on. The first night [in San Francisco] I got on the really tall speaker and got really scared. I’m like, I’m not doin’ that the second night!

In Dallas one time, it wasn’t well-lit on the stage. I jumped in front of the horn mics and I couldn’t see the stage or the monitor. So I tripped over the monitor and took out both horn mics, the trombone player broke his slide out. I thought I broke my ankle, but it was just really badly bruised.

MJ: You sing so much about love and affection: How do you get in the mood if your personal life is making you feel down or cynical?

PJ: I got married seven weeks ago. It’s weird because I’m very happy, and some of the songs are about heartbreak. I’m not really heartbroken. When it’s show time, when you have a song that’s danceable, it’s easy to sing about love and sex.

“‘Try a Little Tenderness’ is a monster of a song. I don’t know why we have the guts to do it. It’s sacred territory.”

It’s really the ones about heartbreak and sadness that are difficult to handle because I have to get to a place mentally during the song that’s not really where I want to be. We have this song called “Broken Bones and Pocket Change“: Sometimes I get really emotional, and I have to take a break, 20 seconds to be like, “Okay, we’re done with that one.” You want the song to have the same meaning it had when you sang it the first time.

MJ: You really belt. How do you take care of your voice?

PJ: A lot of Coca-Cola. [Laughs]. That’s not really good for you, but I do drink a lot of Coke. I don’t drink alcohol; I don’t smoke. I never have in my 31 years on the planet. I do vocal warm-ups. I use this spray called Entertainer’s Secret. And sleep. The thing is, I can sleep 12 to 13 hours. It’s pretty vital to the rejuvenation of the voice. You do it night in and night out, your voice has to recuperate, it’s key. I think if I was a hard partier, I think it would be a lot tougher. But I’m not; I’m pretty lame.

MJ: I think I heard you say on stage that Otis Redding’s “Try a Little Tenderness” was the best soul song of all times.

PJ: It’s definitely one of the best. As a song live, you can’t follow it. I think Sam Cooke’s “A Change is Gonna Come,” and then a William Bell song, “I Forgot to Be Your Lover.” Those three songs to me—it’s kind of like picking your favorite kid though.

“Try a Little Tenderness” is an old song. But as far as Otis Redding’s execution, it’s one of the best executions ever. Live, it’s a monster of a song. I don’t know why we have the guts to do it. It’s sacred territory. I think when we were starting out, we were too stupid to think about that. We just loved the song. We were like, we know this is a classic: If you can’t measure yourself to that, you don’t need to be doin’ this.

MJ: Let’s talk about the art of the carefully selected pocket squares. Do you pick your own?

PJ: I do, I do. I’ve actually lost quite a few at this point. They end up in my book bag or somewhere else. There was a really great one, that was like lacy, almost like panties. It was pink. That was the best pocket square I’ve ever had, but I cannot find it. It was amazing.

I actually handle all that stuff myself. Those gold shoes are the only thing I like wearing—they are just flashy enough to make me feel good about doin’ it.

PJ: It says Alabama. It’s an Alabama football thing. It’s my code way to stayin’ real tied to the state of Alabama—a little piece of home.