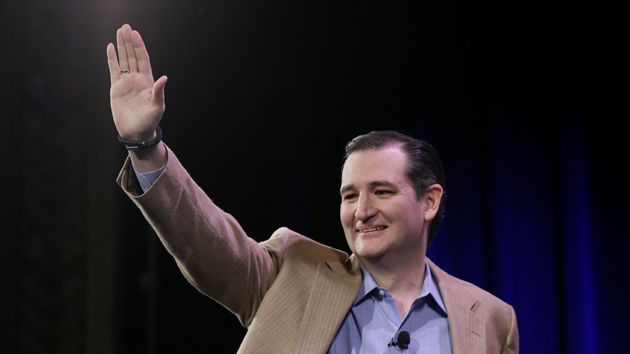 There are few members of Congress more opposed to using government funds to boost the economy than Sen. Ted Cruz (R-Texas). As a candidate in 2011, he blasted President Barack Obama’s job creation agenda as “yet another rehash of the same big-government stimulus programs that have consistently failed to generate jobs.” Government, he went on, “doesn’t create jobs. The private sector…creates jobs.” In office, Cruz has inveighed against the president’s “failed stimulus, which reminds us that jobs are not created by the federal government”—a message he’s sure to repeat if he launches a presidential bid, which looks more likely by the day.

But before entering politics, when he was a $695-an-hour lawyer in private practice, Cruz once delivered a full-throated defense of the stimulus spending he now condemns. In a little-noticed legal brief Cruz filed in July 2009 on behalf of the Texas Retired Teachers Association, he argued in favor of the legality and constitutionality of the Texas state government using federal stimulus money to cut a one-time $500 check to some 250,000 retired teachers. Moreover, Cruz touted the economic benefits of the payments and noted that they would help fulfill the mission of Obama’s stimulus. These $500 checks, Cruz wrote, “will directly impact the [Texas] economy…and will directly further the greater purpose of economic recovery for America.”

The back story goes like this: In early 2009, Obama signed into law the American Recovery and Reinvestment Act, his $787 billion stimulus bill. Of those funds, Texas received $17 billion. Despite the Texas GOP’s overwhelming opposition to Obama’s stimulus package, Texas Gov. Rick Perry and the Republican-led Legislature not only accepted the stimulus money, but used $6.4 billion of it to balance the state budget.

Almost a fifth of Texas’ stimulus dollars were earmarked for education. So Democrats and Republicans in the Texas Legislature crafted a deal in which a chunk of those education funds—$155 million—financed a one-time $500 payment sent to a quarter-million retired public school teachers across the state. When the legality of this deal was called into question, the Texas Retired Teachers Association enlisted the white-shoe law firm of Morgan Lewis and one of its top partners, Ted Cruz, to mount a defense.

The stimulus payments, Cruz wrote, “will directly impact the [Texas] economy…and will directly further the greater purpose of economic recovery for America.”

Cruz had joined the Houston office of Morgan Lewis a year earlier, after serving as Texas solicitor general, the state’s lead attorney, from 2003 to 2008. As a partner at the firm, Cruz billed as much as $695 an hour for his services, whether he was representing multinational corporations before the US Supreme Court or providing legal advice to Texas Lt. Gov. David Dewhurst (whom Cruz would later beat in the state’s GOP Senate primary).

The teacher payment deal depended on then-Attorney General Greg Abbott giving it his legal imprimatur. Before doing so, Abbott—who is now the state’s governor—asked outside parties, including the Texas retired teachers group, to weigh in with legal briefs. On July 20, 2009, Cruz filed his 20-page defense of the payments with the AG’s office on behalf of the Texas Retired Teachers Association.

Cruz’s brief was heavy on legal jargon, but he pointed to a section of the Texas Constitution that allows for deploying public funds for the “development and diversification of the economy of the state, the elimination of unemployment or underemployment in the state…or the development or expansion of…commerce in the state.” Putting $500 in the pockets of a quarter-million retired teachers would do just that, Cruz explained:

Later in the brief, Cruz urged Abbott, a fierce foe of Obama, to green-light the stimulus-backed payments so as to best fulfill the Obama administration’s directive to spend stimulus dollars quickly “to help drive the nation’s economic recovery.” And he concluded the brief with yet another strong plea to approve the payments, insisting that the deal “will directly impact the economy in both the metropolitan and rural areas of Texas, and will directly further the greater purposes of economic recovery for America as envisioned by” the Obama administration.

In a statement to Mother Jones, a spokeswoman for Cruz said that the future senator was merely doing his job representing the Texas Retired Teachers Association with his 2009 brief. “The stimulus legislation had already been enacted, and Cruz quoted the legislative findings and argued that his clients satisfied the statutory requirements for funding,” the spokeswoman, Catherine Frazier, said. “As a policy matter, Sen. Cruz disagreed with the stimulus, and were he then in the Senate, he would have voted against it. But after it was passed, Cruz argued that it should be implemented pursuant to the explicit requirements of federal law.”

In the end, Cruz’s pro-stimulus argument went for naught. Abbott, the Texas AG, declined to issue a conclusive opinion on the legality of the retiree payments and the deal died without the retired teachers seeing a dime. Cruz, though, made off well: For a few weeks’ work, according to TRTA Executive Director Tim Lee, he and his firm pocketed a cool $38,000.