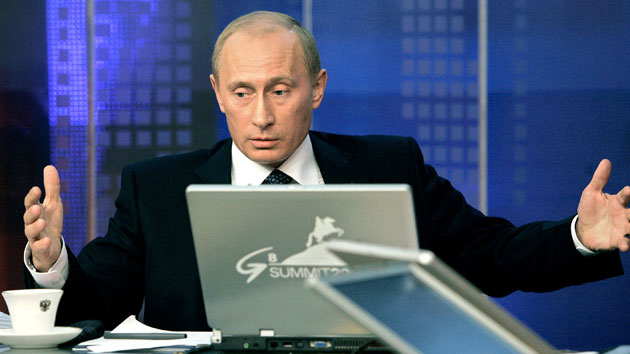 Twice a year, Twitter voluntarily reveals which governments and law enforcement agencies around the globe ask for users’ personal information or demand that it remove specific tweets.

The latest of these transparency reports came out Monday, and this time, there was a new name on the list of countries that have asked Twitter for user information: Vladimir Putin’s Russia. “In Russia, we went from having never received a request to receiving more than 100 requests for account information during this reporting period,” Jeremy Kessel, Twitter’s senior manager for global legal policy, wrote in a blog post published Monday.

Russia loosened up its controls on freedom of speech after the Cold War, but recently the government has become more aggressive in cracking down on citizens who say negative things about the government or its military. Human Rights Watch and other human rights groups have criticized the Russian government for censoring its citizens. But before June 30, the Russian government had never asked Twitter for private details about its users living in Russia. Over the past six months, though, Russia leapfrogged to near the top of the list, making 108 requests for account information. All were denied.

Russia also made 91 requests to remove content they deemed critical of the government, or against Russia’s speech laws. Many of those requests attempt to silence critics of the Russian government, including court orders or official requests from the police or government agencies that claim that the language of a particular Tweet violates the country’s speech laws. Russia submitted two court orders and 89 other requests to Twitter, specifically identifying 91 accounts that the government wanted expunged.

“We denied several requests to silence popular critics of the Russian government and other demands to limit speech about non-violent demonstrations in Ukraine,” Kessel wrote in Twitter’s blog post on the report.

One prominent example is Alexei Navalny, a leading Russian opposition figure and anti-corruption blogger who staged an anti-government rally in January. Navalny is widely described by human rights groups as one of Putin’s most powerful critics. Russia’s internet regulators demanded that American social-media companies block postings about the rally. Facebook agreed to block Vavalny’s page within Russia, but Twitter did not.

Twitter only agreed to remove content within Russia on three accounts—two of which Twitter reported to the Chilling Effects internet transparency website. One promoted illegal drug use, and another promoted suicide. If a Russian user tried to read a one of these tweets, a message appeared saying the tweet has been blocked within Russia. Everyone outside Russia could still see all of the content, and users still within Russia could get around the block by changing their location within their account settings.

“These reports shine a light on government requests for customers’ information,” Kessel wrote. “Providing this insight is simply the right thing to do, especially in an age of increasing concerns about government surveillance.”

But this recent attempt to crack down on Twitter is just one piece of Russia’s aggressive data-monitoring programs. In late December, Putin signed a law that would require companies to store all personal information about consumers on hard drives inside Russia, so that the government could get its hands on it quickly. The Roskomnadzor, Russia’s federal watchdog service that oversees the web in Russia, has been slashing access to websites the government doesn’t like since the summer of 2012. “This new crackdown is aimed at silencing voices in Russia that are critical of the government at a time when open, public debate is essential,” said Hugh Williamson of the Human Rights Watch in March, 2014. But if Twitter’s report is any indication, the crackdown may have a harder timing limiting the freedom to tweet.