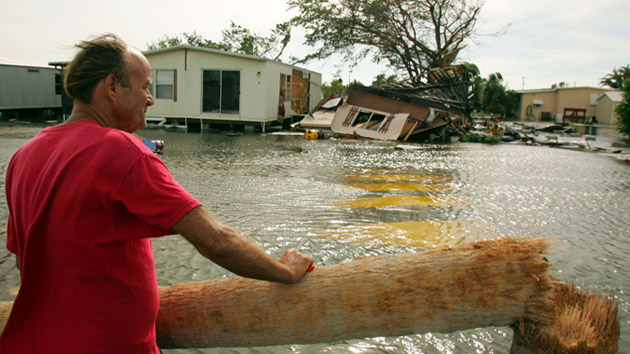 The aftermath of Hurricane Wilma in 2005Luis Alvarez/AP

This story was originally published by the Guardian and is republished here as part of the Climate Desk collaboration.

Officials with the Florida Department of Environmental Protection (DEP), the agency in charge of setting conservation policy and enforcing environmental laws in the state, issued directives in 2011 barring thousands of employees from using the phrases “climate change” and “global warming,” according to a bombshell report by the Florida Center for Investigative Reporting (FCIR).

The report ties the alleged policy, which is described as “unwritten,” to the election of Republican governor Rick Scott and his appointment of a new department director that year. Scott, who was re-elected last November, has declined to say whether he believes in climate change caused by human activity.

“I’m not a scientist,” he said in one appearance last May.

Scott’s office did not comment on Sunday, when contacted by the Guardian. A spokesperson for the governor told the FCIR team: “There’s no policy on this.”

The FCIR report was based on statements by multiple named former employees who worked in different DEP offices around Florida. The instruction not to refer to “climate change” came from agency supervisors as well as lawyers, according to the report.

“We were instructed by our regional administrator that we were no longer allowed to use the terms ‘global warming’ or ‘climate change’ or even ‘sea-level rise,'” said a second former DEP employee, Kristina Trotta. “Sea-level rise was to be referred to as ‘nuisance flooding.'”

According to the employees’ accounts, the ban left damaging holes in everything from educational material published by the agency to training programs to annual reports on the environment that could be used to set energy and business policy.

The 2014 national climate assessment for the US found an “imminent threat of increased inland flooding” in Florida due to climate change and called the state “uniquely vulnerable to sea level rise.”