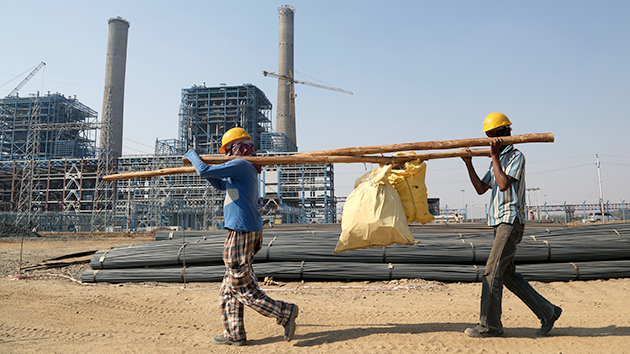 Japan is at it again. Back in December, the country got caught trying to pass off $1 billion worth of investments in coal-fired power plants in Indonesia as “climate finance”—that is, funding to fight climate change. Coal plants, of course, are the world’s single biggest source of carbon dioxide emissions.

Today, the Associated Press discovered over half a billion more:

Japanese officials now say they are also counting $630 million in loans for coal plants in Kudgi, India, and Matarbari, Bangladesh, as climate finance. The Kudgi project has been marred by violent clashes between police and local farmers who fear the plant will pollute the environment.

Tokyo argues that the projects are climate-friendly because the plants use technology that burns coal more efficiently, reducing their carbon emissions compared to older coal plants. Also, Japanese officials stress that developing countries need coal power to grow their economies and expand access to electricity.

Putting aside Japan’s assumption that developing countries need coal-fired power plants (a view still under much debate by energy-focused development economists), the real issue here is that there isn’t an official, internationally recognized definition of “climate finance.” In broad strokes, it refers to money a country is spending to address the problem of climate change, through measures to either mitigate it (i.e., emit less carbon dioxide from power plants, vehicles, etc.) or adapt to it (building sea walls or developing drought-tolerant seeds, for example). But there remains little transparency or oversight for what exactly a country can count toward that end.

The reason that matters is because climate finance figures are a vital chip in international climate negotiations. At a UN climate meeting in Peru late last year, Japan announced that it had put $16 billion into climate finance since 2013. Likewise, President Barack Obama last year pledged $3 billion toward the UN’s Green Climate Fund, plus several billion more for climate-related initiatives in his proposed budget. Other countries have made similar promises.

Each of these commitments is seen as a quantitative reflection of how seriously a country takes climate change and how far they’re willing to go to address it, and there’s always pressure to up the ante. And these promises from rich countries are especially important because in many cases the countries most affected by climate change impacts are developing ones that are the least equipped to do anything about it—and least responsible for the greenhouse gas emissions that caused global warming in the first place. But the whole endeavor starts to look pretty hollow and meaningless if it turns out that “climate finance” actually refers to something as environmentally dubious as a coal plant.

These numbers will take on increasing significance in the run-up to the major climate summit in Paris in December, which is meant to produce a wide-reaching, meaningful international climate accord. So now more than ever, maximum transparency is vital.